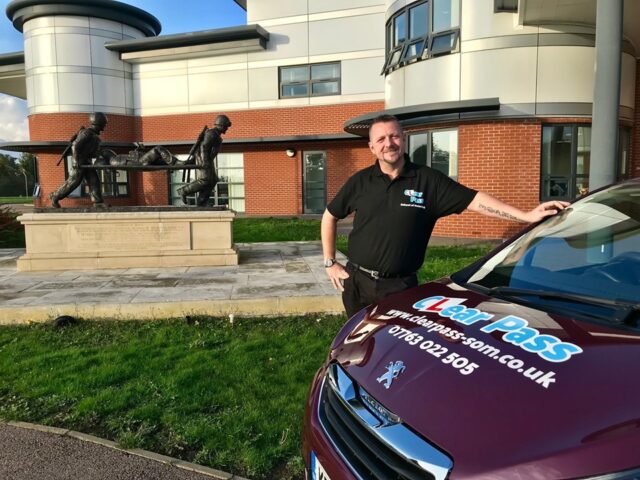 Winston Churchill once said: “Success is not final, failure is not fatal: it is the courage to continue that counts”.

It is this tenacious attitude to adapt to life changing experiences that embodies the courageous spirit of the Help for Heroes Band of Brothers Fellowship – a network of veterans and military personnel who have been wounded or injured, as a result of their service and require ongoing support.

Veteran Paratrooper medic and Military Cross recipient, Sgt Stuart Giles, knows all too well the difficulties of transitioning from a distinguished career in the military to life as a civilian. He was medically discharged in August 2019 following 22 years of service due to back, leg and hip injuries.

Born and bred in Clacton-on-Sea, Stuart joined up on his eighteenth birthday and went on to serve in Afghanistan, Iraq and Northern Ireland. He was responsible for running 3 Para Driver Cell Training and risked his life twice tending to wounded soldiers whilst under heavy fire from Taliban insurgents, in Helmand Province in 2006. He was presented with the Military Cross for bravery by HRH Queen Elizabeth II the following year and says of his medal: “I wear that for my friends and my regiment. I could name you hundreds of paratroopers who could quite easily have that on their chest. To me it is a mark of respect to those that didn’t come back and to those that did make the ultimate sacrifice.”

Julian North, Recovery Manager North at Help for Heroes, said: “It should not be underestimated what a profound impact it has on a soldier when they are forced to leave behind a career that, up until that point, had been such a large part of their life and sense of identity. Earlier this month Help for Heroes revealed that injury has forced almost 40,000 men and women to leave the military over the past 20 years. Over 25% of these have been since the end of the war in Afghanistan, despite the British Armed Forces not being engaged in active conflict during this period. Every day this number grows. Many of them tell us that their transition impacted significantly on their health, wellbeing and family. It is for this reason that Help for Heroes provides such vital support to veterans during this difficult adjustment period and indeed for life if they need it”.

Stuart explains: “Planning for life outside the military can be overwhelming. Help for Heroes was a great portal of knowledge which gave me the tools to settle into civilian life”.

Stuart wasted no time in getting his life back on track and he did a Careers Transition Course with the Ministry of Defence. Guidance from Help for Heroes then gave him the confidence to consider setting up his own business and it is to his credit that within a matter of months, he used his transferrable skills to set up Clear Pass School of Motoring. The core aim of the driving school is to produce safe, confident and competent drivers who have not simply passed their driving test, but who also have some basic car maintenance knowledge, including how to change a wheel and check tyre pressures.

As a nod of acknowledgement to fellow military personnel, veterans, their families and the emergency services and to show his appreciation for the support he received from Help for Heroes, Stuart offers discounts for customers who work in these sectors. He has also set up a grant in collaboration with Help for Heroes which each year provides one Band of Brother or Sister (or one of their dependants) free driving tuition up until they pass their test. Stuart hopes to expand on this as his business grows.

Stuart is an inspirational role model to those who are struggling with life after the military and his personal journey clearly demonstrates what is possible, with the right support and encouragement. He is just one of the 40,000 people who have been medically discharged from the military in the last 20 years. With your support Help for Heroes can help wounded veterans stand strong: https://www.helpforheroes.org.uk/40thousandstrong/