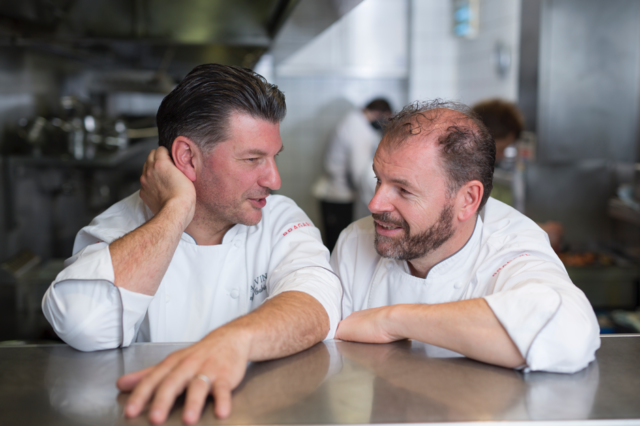 “It’s a combination of disruption and continuity that’s brought us this far,” explains Chris Galvin as he and brother Jeff celebrate ten years since the launch of their two Spitalfields restaurants. Chris and Jeff are the only British brothers in the kitchen who each have a Michelin star and are still working together every day.

“Over the years is more or less inevitable to have the same offering in food, service and atmosphere. We need disruption in the way we look after our customers. People get bored and tastes change. Just this year we have fundamentally reinvented Galvin HOP. Everything from décor to the menus, the wines, the music, the very chairs and tables are new – even our name – we are now Galvin HOP Bistrot & Bar. And the results are spectacular.”

“Yet we also have to have continuity,” says Jeff. “The majority of the suppliers we use now are the same ones we started with ten years ago. They have become partners, even friends. They know what we want and we know what they can supply. Chris and I can have an idea of a menu change we want to make and we talk to our friends to make sure it is the best it can be.”

The same goes for the equipment the two chefs use in the kitchen. When it comes to restaurant suppliers, it seems that only the finest such as Nella Food Equipment can stand the test of time.

This culinary restlessness will also continue. “There’s no such thing as a perfect recipe, either for the food itself or the success of a venture,” comments Chris.

“Instead of patting ourselves on the back for surviving in the toughest hospitality arena on earth we are more used to analysing the things we could do better.”

When identifying their achievements Chis is typically most proud of the latest. “We are the first and so far, only restaurant in the world to have developed and achieved Global Certification. We worked with City and Guilds to develop a certification blueprint that will be recognised all over the world and works for all levels of people employed in the hospitality industry.”

Other highlights include the brothers’ pride in having trained so many young team members who have gone on to achieve great things all over the world. And the number who, having flown the Galvin nest, have returned in more senior positions.

A notable highlight was the publication of Galvin a Cookbook de Luxe which told the brothers’ story, outlined their philosophy and, of course, contained their most famous recipes. The brothers are now planning a follow-up collection of recipes for today’s home cooks provisionally entitled ‘Galvin Made Simple’.

“We appreciate not everyone has the time or the interest to cook more complicated recipes,” says Jeff. “We want to show that you can achieve spectacular results with a more limited number of ingredients and in less time.”

In (2009) the brothers took over a derelict school for girls not far from Liverpool Street Station which they have turned into one of London’s finest French restaurants – Galvin La Chapelle which has just celebrated being awarded a coveted Michelin star for the ninth consecutive year.

“La Chapelle is a particular delight to us as it truly reflects everything we hold dear,” explains Jeff. “We were both French trained at the beginning of our careers and the basic techniques we learned then are the basis for the food we produce now. The finest ingredients cooked with care, served with flair and attention to detail; entrancing both our regular customers and first-time visitors.” 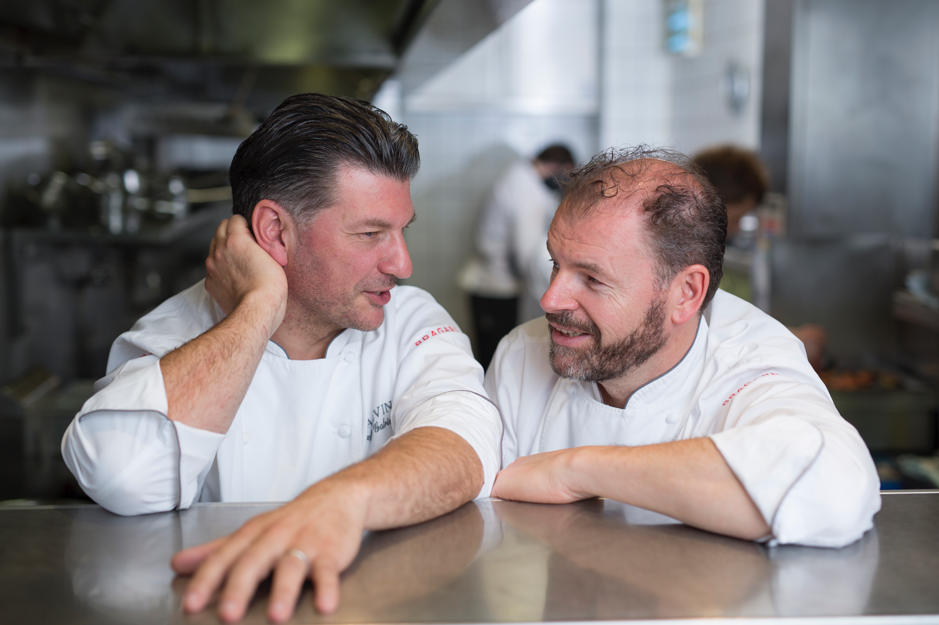 Charity has always been close to the hearts of both Galvin brothers. Many of the charities they support are food and cooking related such as Galvin Chance, Royal Academy of Culinary Arts programme, Adopt a School, which aims to help primary school children understand the basics of health eating and building good dietary habits that can last a lifetime. This interest in education also extends to their restaurants where more than 50 apprentices are currently learning their trades and taking the first steps to a career in hospitality.

A final word from Chris; “It’s hard to believe that ten years have passed since Jeff and I opened Galvin La Chapelle and Galvin HOP (former Café a Vin). We’ve been helped from day one by an unsung member of the team, our middle brother David who has been at the markets sourcing our produce early each morning we are open. He’s sourced enough food for us to be able to claim that we’ve served over one million diners in those ten years.

“Jeff and I are keen to look forward rather than back and as we’ve said this is a dynamic and changing business. One thing that will never change is our belief in integrity and sustainability throughout our company. The next milestone in our journey will be the opening of our Tottenham restaurants this year – a culmination of working together and creating the best dining experiences for the UK public,” Chris said, in a hint at the busy future for Galvin.