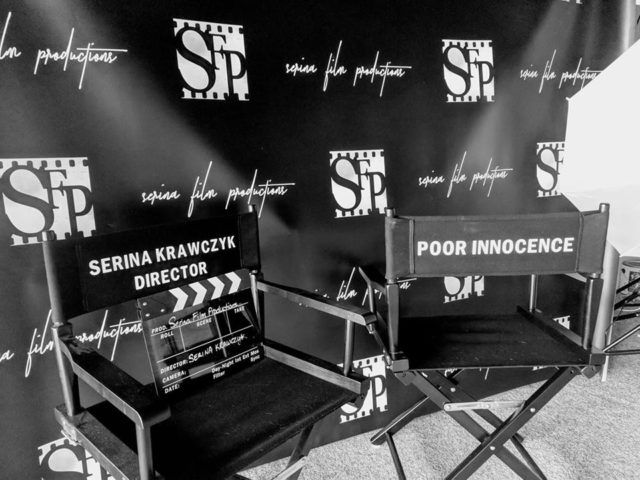 Not every city girl from Detroit can go to Hollywood with a script, expecting it to turn into a movie. Producer Serina Krawczyk shows us that curiosity, determination, and surrounding yourself with people you love, makes the process that much easier. We talk about life and her upcoming movie, Poor Innocence. 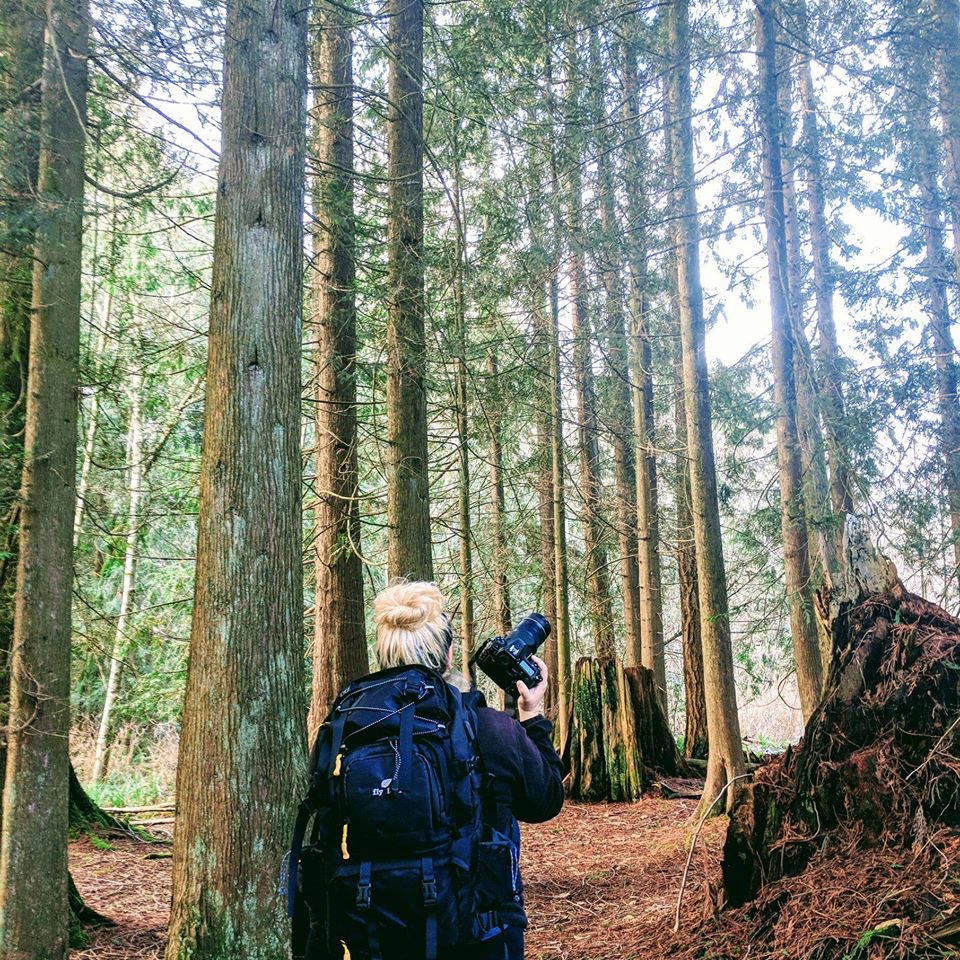 Samuel P. Hilford You’re from the Midwest- Detroit, Michigan. What was it like growing up there?

Serina Krawczyk: Those that have never lived in Michigan, don’t really understand what it’s like out there. And Detroit- it’s a hard city to love, and that makes the affection one feels for it all that more intense. I grew up in Dearborn, a very heavily populated Arab community. I, myself, am half Lebanese and came from a poor family. A very dysfunctional family. Most of my childhood isn’t that exciting to talk about. I always stuffed my face in sketchbooks, writing lots of poetry, hockey, and music.

Hilford: Your movie “Poor Innocence” is your very first big film and you’re attending some big film festivals next year. Especially in Ireland and Canada. How does that feel?

SK: I looked at my husband, Chris, and said “I will not press charges for spousal abuse, but can you slap me across my face to wake me up from this dream?”. I have no words, honestly. Stuff like this doesn’t happen to someone like me. I put my script out there just to see what people thought and wasn’t expecting to hear good reviews about it. It’s loved by so many; I have no idea what to say. I guess most can relate and childhood depression is something we don’t speak about enough. Most kids don’t ever grow out of it. As an adult today, I love helping people with mental illness. Being someone’s shoulder and a pair of ears is the best thing you can do for someone who battles their demons. 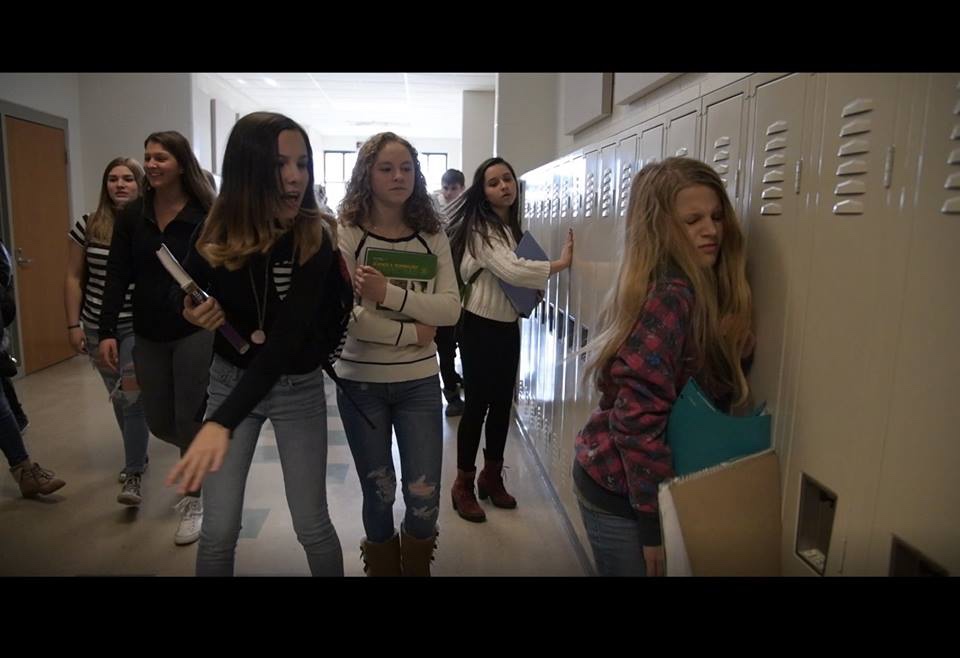 Hilford: Which you yourself have battled with depression and you’re very open about it.

SK: That was honestly the only way I could deal with it. To sit and be silent about depression and have other’s wonder what is going on with me. I could see the confusion in their eyes. I’ve always been best at expressing my feelings on paper. The day came when I took my thoughts to social media and expressed to my friends and family that I had depression. I kid you not, weight was instantly lifted and ever since then I’ve been helping people with mental illness. 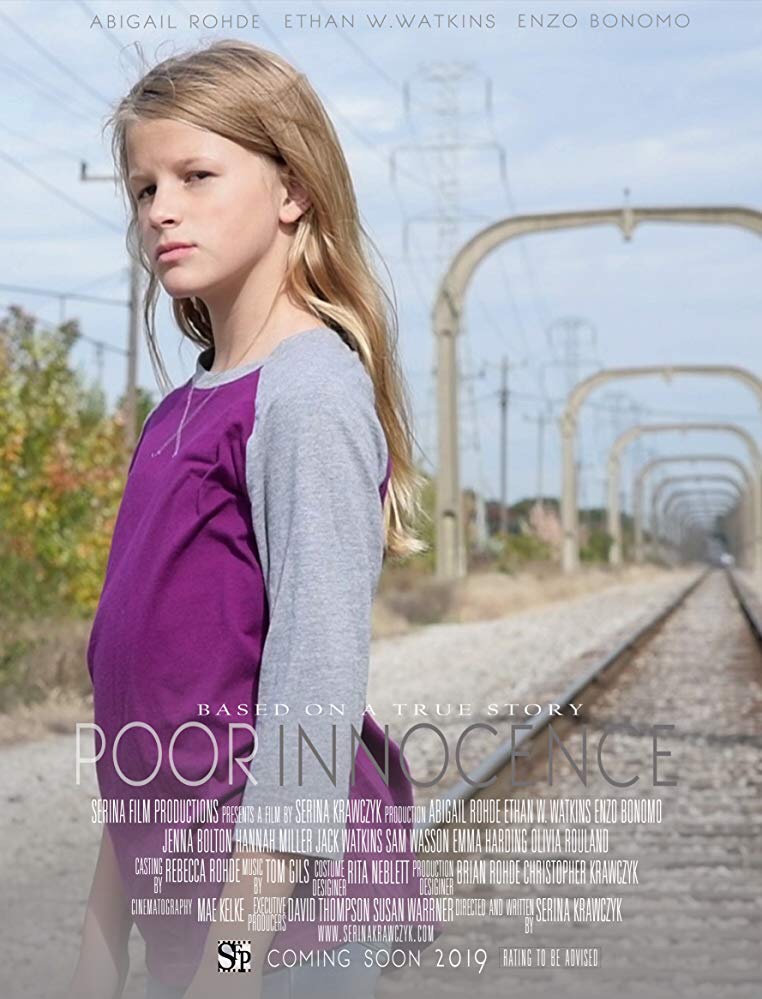 Hilford: Is that what inspired you to make your movie ‘Poor Innocence’?

SK: It was a mix of things. Real life childhood events. My depression and the fact that kids are still getting bullied in school. It’s sickening to hear that kids are pushed to suicide due to bullying. I have a story to tell and I want to share it with the world. I remember my husband and I drove around Hollywood and Los Angeles, and Zombie by Miser came on the radio. I got instant goosebumps just listening to that song and looking around the city. People walking by with vibrant colors. They were smiling and laughing. We went up to the Hollywood sign and I told him that I’m doing this. I’m making this film. We took my script out of my backpack and took a picture of it with the Hollywood sign in the background. 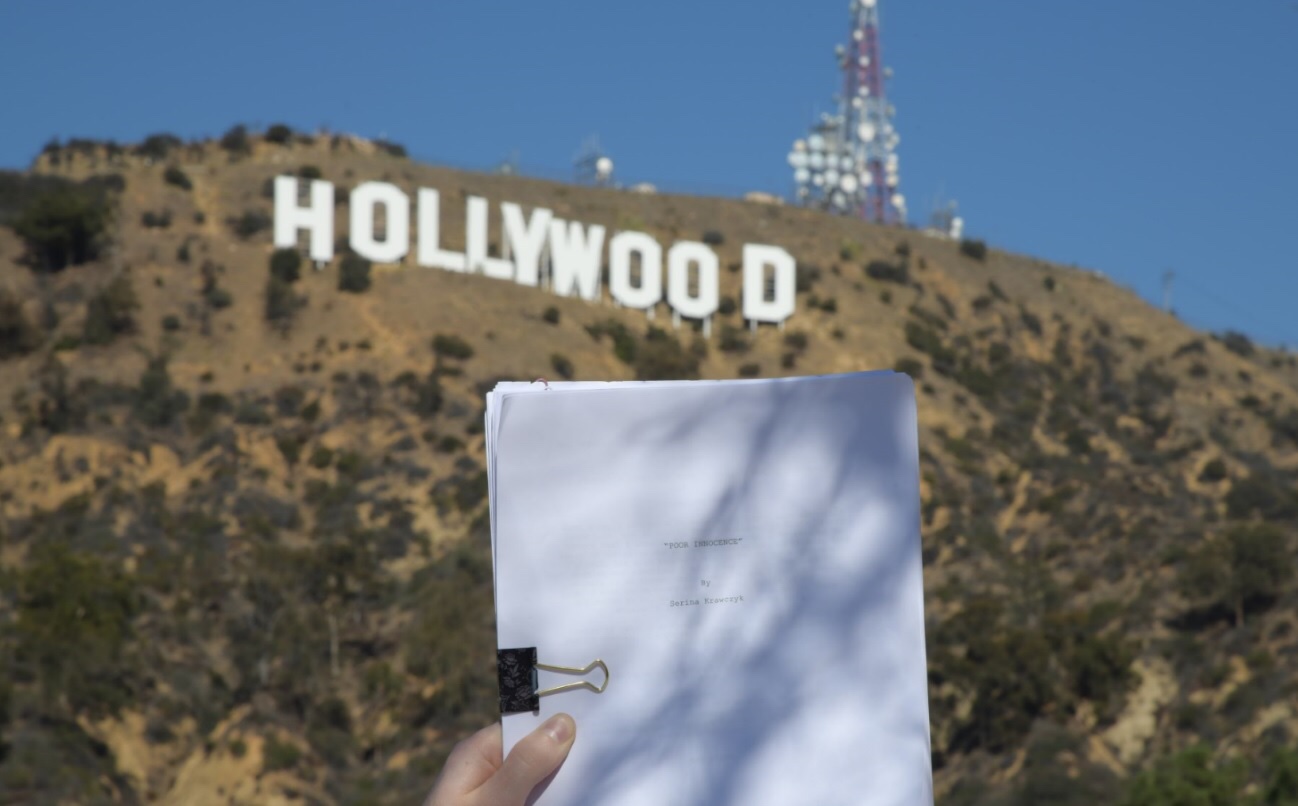 Hilford: How long did it take you to write the script?

SK: Two and a half years. And listening to Thirty Seconds to Mars along with Breaking Benjamin on repeat.

SK: I can’t sit in silence and write. Even when I was a kid writing poetry or drawing, I always had headphones on, and I would just get lost in music for hours. 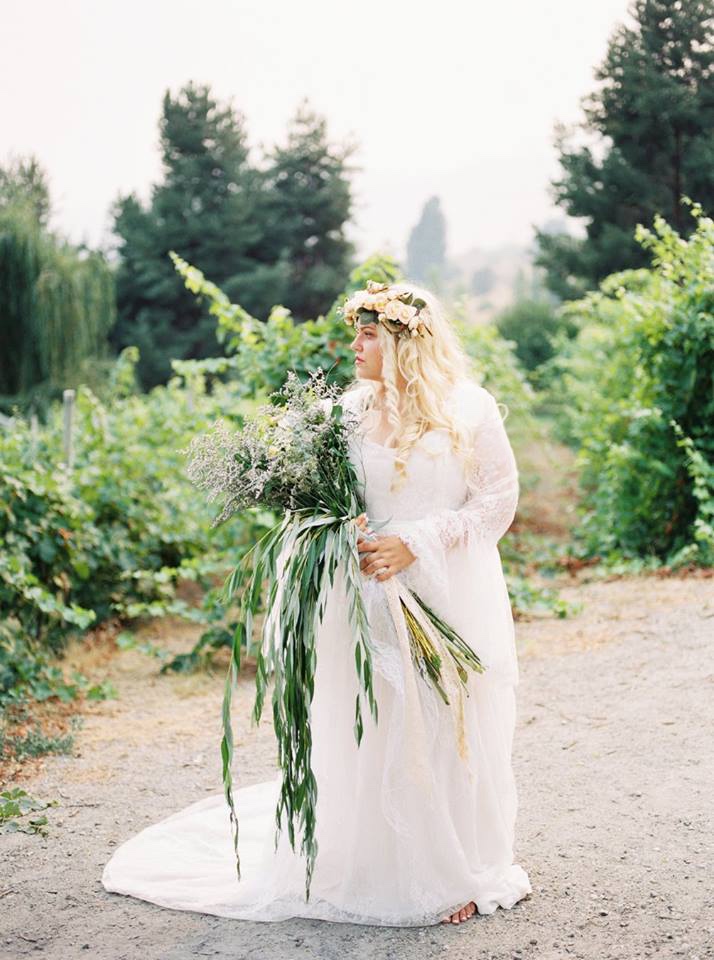 Hilford: Favorite song you had when writing ‘Poor Innocence’?

SK: I would have to say I had ‘The Kill’ by Thirty Seconds to Mars on repeat. Hundreds of times a day for
two years.

Hilford: When does ‘Poor Innocence’ premiere?

SK: Look for it in LA, Seattle, and Detroit Fox Theater next year.

Hilford: You are being a producer, director, writer, filmmaker, how do you have any time?

SK: Must make time. Can’t neglect your loved ones. I’m lucky to have such amazing and understanding friends and family. At the same time, I love what I do. I can be as creative as I want and meet so many great people from around the world. 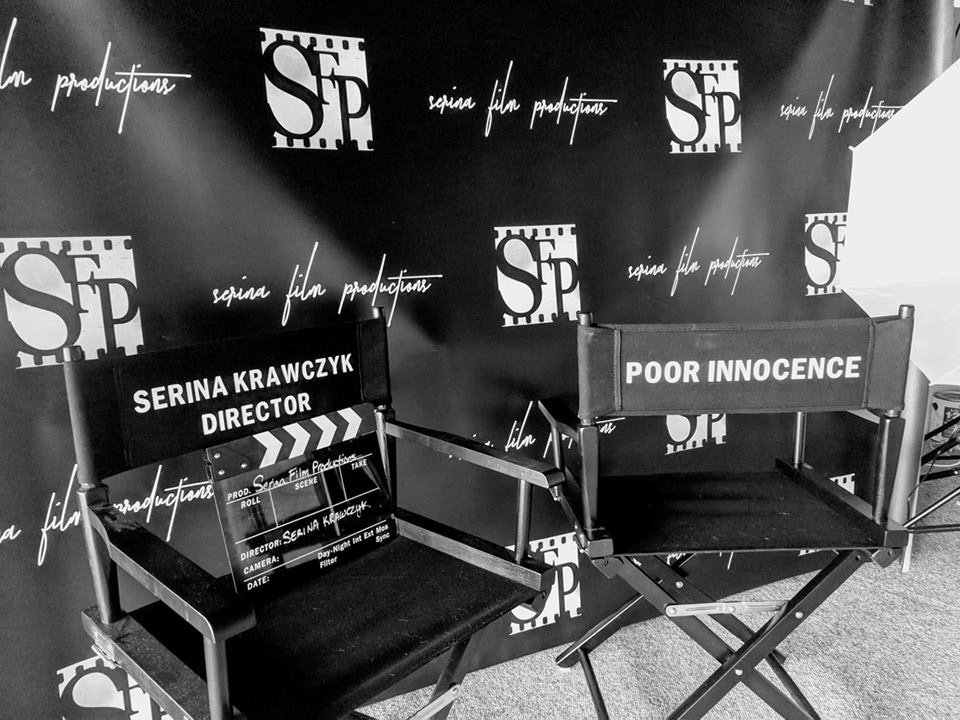 Hilford: Are you working on any new projects?

SK: Yes! I have a YouTube series that I’m working on called ‘Moto Geeks Garage’. NCIS in Los Angeles this fall. Just got back from filming in Ireland. I also have another movie of mine I’ll be working on late next year. But my focus is ‘Poor Innocence’ until it’s on Netflix next year.

Hilford: Serina, I loved learning about you, and we look forward to seeing ‘Poor Innocence’ along with your future work. Any last words for fans and supporters?

SK: THANK YOU. I don’t think I say it enough and I’m not sure you all know how thankful I am to have each and every single one of you with me on this journey. My cast and crew: Abigail, Jenna, Ethan, Jack, Enzo, Hannah, Emma, Gio, Nai’a, Sylwia, Daniella, Daphne, Lauren, Sophia, Olivia, Skylar, Mae, Paula, Brian, Briana, Rebecca, Rita, Kristen, Stephany, Hailey, all of Armada and Romeo High School in Michigan. My Friends and family. My husband, Chris. To those that have cheered me on, I see you: Helen & Stu, Kit Traynor, Victor Curtis, Michael Andros, Alecia & Michael Vendittelli, Tara Howard, Andrea Bolton, Tara Boufford, Watkins family, Bonomo family, Miller family, Stacy McKenzie, Bre’Ann, Zeinab, Abbas, Brandon Waterstradt, Melissa McSheehy, MJ Harrell, and Anna Adamusik.