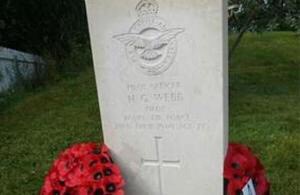 Pilot Officer Hector Garmen Webb of 224 Squadron, RAF, who was killed during WW2 has had a rededication ceremony at Andalsnes Church Cemetery, Norway

Verifying the research submitted was crucial in identifying the final resting place of Pilot Officer (P/O) Hector Garmen Webb of the 224 Squadron, Royal Air Force (RAF), who was killed during WW2.

A rededication service was held on 8 August 2017 at the Commonwealth War Graves Commission (CWGC) Åndalsnes Church Cemetery, Norway 77 years after he fell.

The service, which was a fitting tribute to the sacrifice made by P/O Webb, was organised by the MOD’s Joint Casualty and Compassionate Centre (JCCC), part of Defence Business Services, and was conducted by The Reverend Dr David Richardson, RAF Station Chaplain, RAF Halton.