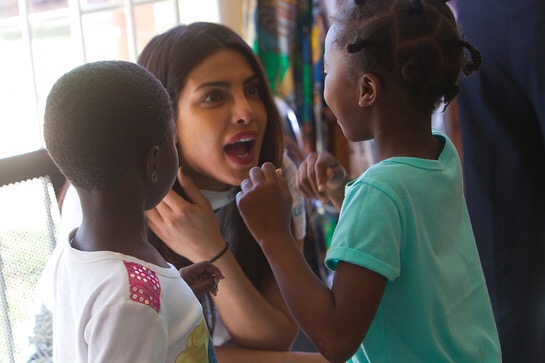 The actress made an emotional visit to Zimbabwe this week, where she met child survivors of sexual violence and heard their harrowing stories.

“When I met these survivors, young brave women and children, and listened to their experiences, it just broke my heart,” said Chopra. “I will never forget their stories.”
Chopra’s first stop was in Chitungwiza, south of Harare, Zimbabwe, where she met 13-year-old Alice who was repeatedly raped by an uncle and threatened if she revealed the abuse.

“Alice told me how she had regular abdominal pains, she was 11 at the time, but her mother was unaware there was something wrong,” said Chopra. “It was only when a relative saw condoms in her bedroom, and realized she was sexually active, that the truth came out and by then she was pregnant. Alice disclosed that her uncle had raped her several times between January and February this year.”

Poverty and a lack of opportunity are huge drivers of violence and leave young women and children in a position of vulnerability to predators.