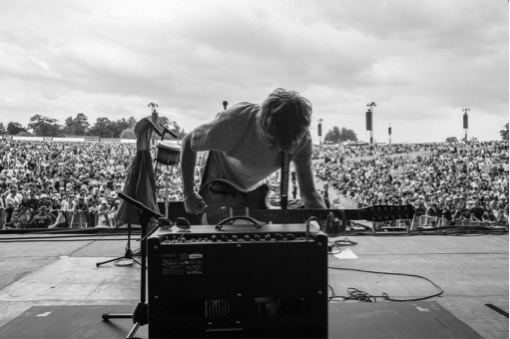 Rock ‘n’ roll tastemakers This Feeling and menswear specialists scotts have taken a who’s who of essential new bands up and down the country this summer, their personally curated stages making a huge impact at festivals including the Isle of Wight, Y Not?, Truck and The Great Escape. They’ve become renowned for being the first to introduce bands such as Blossoms, The Amazons and Yonaka to their line-ups, long before they became main stage festival favourites.

Now This Feeling and scotts bring the tent-filling, next wave thrills of their festival stage to small venues in Leeds and London with the second year of their Rewired Festival. Both days feature twelve artists who are making waves and on the cusp of being things, You can catch them at The Brudenell Social Club in Leeds on Saturday, August 13th and The Garage in London on Sunday, August 14th.

Both venues will be headlined by Pastel. Liam Gallagher’s favourite new band caused a stir when they opened for the iconic frontman at Knebworth Park, proving that they have the songs, the ability and the charisma to win over a huge audience. Pastel’s anthemic cocktail of psychedelia and shoegaze also reached new heights on their recent single ‘Escape’.

Both venues feature local co-headliners. Yorkshire’s Serotones will co-headline in Leeds. Their previous singles have inspired comparisons with The Smiths and Shed Seven, while their first single of 2022, ‘Nothing’s What It Seems’ adds ethereal shoegaze elements into the mix. Meanwhile, Lock-In bring their uplifting indie-pop and tales of youthful adventure such as ‘Get Over It’ as co-headliners in London.

Serotones and Lock-In will perform at both venues, where they’re joined by a selection of rising talents. They include Gen and the Degenerates, who won plenty of new fans on a recent tour as guests to the legendary Skunk Anansie; two great new Manchester guitar bands in the shape of Rolla and Rosellas; The Chase, who attracted huge crowds at the Isle of Wight and Y Not?; one of the north-east’s brightest new hopes Komparisson, the immensely promising Welsh teenage singer-songwriter Megan Wyn; and Brighton’s new Britpop queen Coco & The Lost.

The Leeds show also features The Facades, another wondrous band emerging from the burgeoning Wigan scene, and riffs and indie floor-fillers from Yorkshire quartet The Sheratons. The London line-up is completed by The Shakes who invoke the sound of The Strokes with the spirit of Oasis, and Southend’s San Quentin, who recently slayed the main stage at Y Not?. New music champion John Kennedy of Radio X will also be DJing at the London show.

James Yates of Pastel commented, “Rewired is going to be HUGE! Top bands all day and us headlining. What more could you ask for?”

The Rewired Festival line-ups are all killer, no filler, but they’re also great value too. For just £12 you get twelve artists (just £1 per performance) and a full-day of music, with both venues opening at 2pm. Tickets are available from This Feeling.

The full Rewired Festival line-up is: