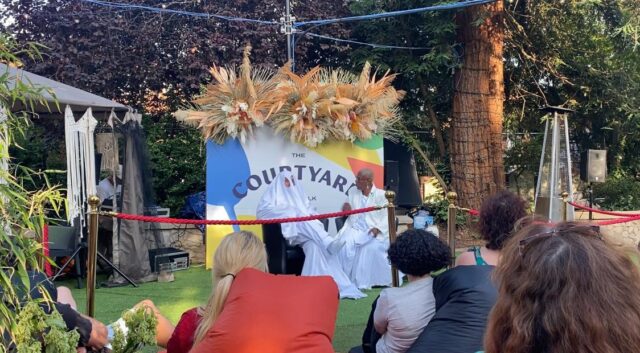 With blue skies and bright sunshine, the Vacay Bar and Courtyard at Lion Walk was a great place to enjoy a live preview performance of the hit family-friendly comedy, Ghost Therapy. It was the show’s final public performance before it heads to the Edinburgh Fringe festival for an eight-day run at The Zoo Playground.

Ghost Therapy is the sensational debut play of teenage writer and director, Jaz Skingle, which was a smash hit at the Colchester Fringe in October 2021. The play explores the ghost world, and more importantly ghost problems, through the insightful and unique view of ghost therapist, Dr Soul. A magical mix of ghostly characters, well they are ghosts after all, share their post-life issues in search of a lasting peace with hilarious consequences in the feel-good play that all the family can enjoy.

The performance at The Courtyard at Lion Walk was the final preparation for cast and crew before the show travels to the iconic Edinburgh Fringe, featuring stars including Trenetta Jones as Dr Soul alongside Charlie Vaughn, Emma Pallett and Ewan Purser.

Jaz, who lives in Copford, commented: “Martin Leatherdale and all the team at Lion Walk Shopping Centre have just been amazing! They’re so supportive and have been since I first met them in October for the Colchester Fringe. It was such a lovely evening and gave us an opportunity to preview Ghost Therapy in Colchester again before we go up to Edinburgh Fringe. I’m so excited to be able to take my first play to the festival, especially for the 75th birthday of the Edinburgh Fringe. I’m sure this Fringe will be one to remember. Good luck to all performers! See you there.”

Martin Leatherdale, centre manager at Lion Walk Shopping Centre, said: “It was great to have the preview of Ghost Therapy at our new Vacay Bar and Courtyard, which has launched for the summer. The Courtyard is a chilled new area to come along and eat, drink and shop throughout the summer, with a programme for entertainment in the evenings too. We always like to support local acts and it’s great to see someone so young doing so much already in the early stages of her career. Well done Jaz and her fabulous cast.”

Ghost Therapy will be live at The Zoo Playground in Edinburgh from Friday, 5th August to Saturday, 13th August with performances twice daily at 11.50am and 19.20pm.