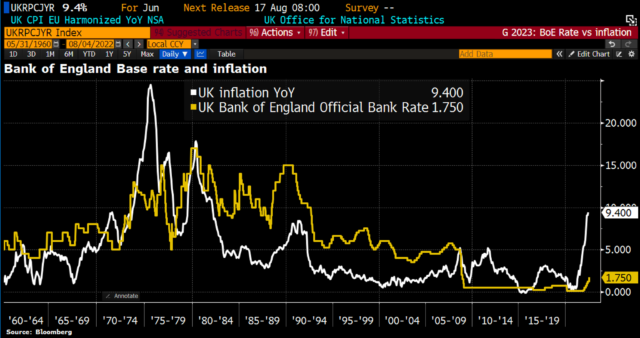 The Bank of England has hiked interest rates by 50 basis points – its largest single increase since 1995 – taking the base rate from 1.25% to 1.75%. This comes after Michael Saunders, a member of the monetary policy committee, stated that UK interest rates could top 2% in the next year. With inflation hitting a 40-year high of 9.4% in June, in addition to surging energy costs and a severe cost-of-living crisis, prospective homebuyers and homeowners with mortgage deals are set to experience a rude awakening following this announcement.

Energy prices are set to soar another 40% in October, while unemployment is likely to rise from 3.8% to 5.5%. On top of that, disposable household income is predicted to fall by 1.75% in 2022, which means that British households are likely to suffer the second biggest squeeze on their incomes since 1964.

On top of this, a new report from property group Savills has revealed the Bank of Mum and Dad (BOMAD) is expected to total £25 billion over the next three years, supporting almost half (46%) of first-time buyer transactions – this equates to almost half a million people across the country. This comes as house prices recently rose to 11% on the year this month, according to figures from Nationwide.

In light of this, property experts, Simon Bath and David Hannah, discuss how the Bank of England’s announcement is set to shake up the property market.

CEO of iPlace Global, the creators of Moveable, Simon Bath, discusses the impacts of rising interest rates on the housing market:

“Whilst the Bank of England’s announcement was expected by economists and experts, a 50 basis point increase will significantly affect prospective buyers and homeowners. At the rate that inflation is rising – it’s predicted to exceed 11% – interest rates could likely get pushed up to 5% by the end of the year.

“This could add to the existing issue of affordability in the housing market, especially as a lack of stock alongside high demand has consistently pushed up property prices. In the past two years, this has been one of the main challenges for those looking to get onto the property ladder, and it’s been further highlighted through Savills’ new figures stating that lending from the Bank of Mum and Dad peaked in 2021, when 49% (198,000) of mortgaged first-time buyers were getting assistance from their families. The Bank of Mum and Dad contributed to a total of £10.7bn during this period – more than double compared to 2019.

“The central bank’s projections that the country could plunge into an economic recession could also have a significant impact on the property market and demonstrates the need for the government to provide support for those looking to buy a home, in particular first-time buyers.

“Further to this, another surge in energy prices will undoubtedly test the government even more. There is a collective sense of urgency across the country for UK leaders to support households in any way possible, especially amidst a cost-of-living crisis which is already significantly affecting levels of disposable income.”