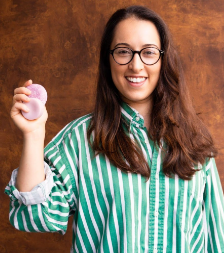 Rosie Myers (30) lives with trichotillomania – a chronic hair-pulling disorder affecting 1 in 50 people across the world including notable sufferers Amy Schumer, Megan Fox, Leonardo DiCaprio and Justin Timerblake – and has been ripping out chunks of her hair from the age of 9.

Dr Ioannis Liakas from Harley Street clinic Vie Aesthetics explains that the condition often has a range of causes, and can cause long-term damage to the hair and scalp.

“Trichotillomania is a psychological condition on the obsessive-compulsive spectrum which can stem from chemical imbalances, changes in hormones or as a coping mechanism for dealing with underlying anxieties.

Treatment for the condition depends on the longevity of the disorder, but counselling is usually the most effective method. With hair loss being a byproduct of this disorder, non-surgical hair restoration treatments can be incredibly effective for restoring hair. However, where hair is pulled from the head with trichotillomania, scarring can be left on the scalp which can be more difficult to treat”.

The onset of Rosie’s trichotillomania can be traced back to her father being sent to prison when she was 5 – and dying 4 years later after being attacked by another inmate.

“I had been desperate to see him again for so long. It turned out he had gotten into a fight in prison, slipped into a coma and was in a vegetative state. It absolutely crushed me. I had so much grief to unpack and pulling my hair out was a byproduct of all the stress. Pulling your hair gives you a controlled pain release and soon it became automatic – I didn’t even realise I was doing it”.

Rosie’s condition led to multiple bald patches on her scalp which she was bullied for at school – which made her hair-pulling even worse.

“Other kids were constantly pointing out the bald patches and the bullying and worrying about how I looked added to the stress and shame so I’d reach for my hair even more. For me, raising my hand to my hair is an automatic stress response and it’s hard to eradicate completely”.

Rosie’s battle with the condition lasted 18 years before a combination of behavioural and hypnosis therapies allowed her to overcome it, and led her to build a booming hair care business for sensitive scalps like hers – nope.