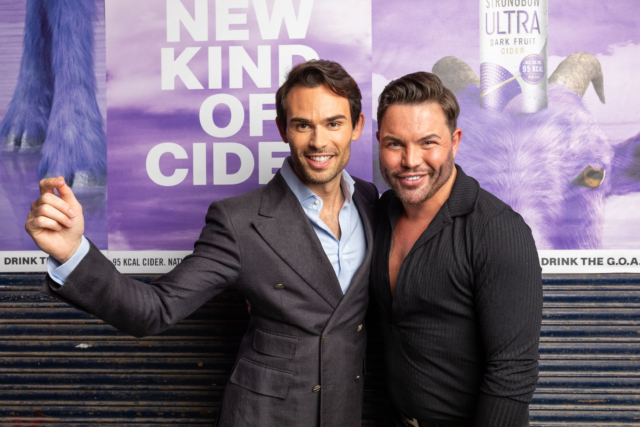 Amid a hazy, purple, goat-scape, Strongbow ULTRA gathered a brave group of celebs, including Essex’s very own, Bobby Norris among others to fight their respective corners in an epic series of debates. The G.O.A.T (Greatest of all Time) was decided once and for all on a range of topics from drag queens to female artists.

For centuries young men and women have debated the issues of politics, philosophy, science, and high-brow culture but last week Strongbow ULTRA Dark Fruit, which has self-proclaimed to be the G.O.A.T cider, brought a fresh new look to traditional debating societies.

Debaters took to the stage in pairs to pit their wits against each other in a series of quick-fire rounds. A watching crowd of 300 guests were tasked with making the deciding votes of the evening, giving a show of cans to seal the deal and crown the final G.O.A.T victors.

The cans were counted and the results came in, with the winners of the Strongbow ULTRA debating society including:

Mark Francis Vandelli, star of Made in Chelsea – who trumped Bobby Norris of TOWIE fame. The boys were campaigning for their own reality shows to be the G.O.A.T and in a witty – and sometimes catty exchange – Mark accused his opponent’s show of filling the world with rubbish. The crowd loved it and Mark took the purple goat trophy, only to hand it over to Bobby in a gentlemanly show of good spirit.
HEINEKEN UK Cider Brand Director, Rachel Holms who was in the front row for the debates, said: “This G.O.A.T campaign is for a new kind of cider and by far one of our most intriguing yet. Our celebrity cast did us proud in settling the debate once and for all. We already know Strongbow ULTRA is the G.O.A.T cider, but now we know who’s the G.OA.T of everything else too.”