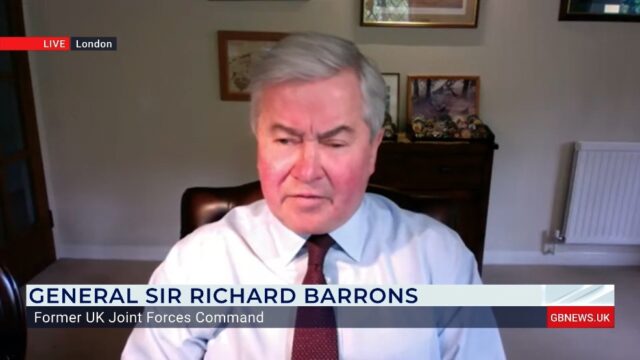 ANY public fatigue over the UK backing the war against Russia in Ukraine will put national security at real risk, a former leading Army general has said.

He was speaking in reaction to comments by the new head of the Army, General Sir Patrick Sanders, who has said that British soldiers must prepare “to fight in Europe once again”.

General Barrons told GB News: “This is absolutely bang on the money.

“What the Chief of General Staff is saying is that we were an army for a generation that did things like Iraq and Afghanistan against opposition that was very tough but it didn’t have artillery or air forces, or armour or do all the things that are joined up army like Russia ought to be able to do, even if it’s right now doing it very badly.

“What Patrick Sanders is saying is the Army needs to be ready to fight in a war against an opponent like Russia.

“That’s a wholly different prospect from many of the things the army has been used to doing in living memory.”

Speaking in an exclusive interview with Alastair Stewart on GB News, he said: “Yes, so we need to recognise big wars. And this is a big confrontation with Russia, even if it’s a big war only in Ukraine, because wars are only ever won by civilians.

“It’s about the mobilisation of popular will, society, industry, as well as the armed forces.

“The way that we protect the UK, these values, interests and security is to make sure that the British people recognise that every time they fill their car or pay their gas bill, they are making a contribution to this war.

“They’re playing their part standing behind the Ukrainians in the trenches in the Donbas right now, and they’re not doing it out of charity.

“We’re doing it because it’s the right thing to do and it’s in our interest, that there is no scope for fatigue in this , this is about the security of our future.”

General Barrons added: “I think he’s echoing the message that people like the Secretary of Defence are saying, and that we’re facing the most profound transformation of defence and security for about 100 years, and it’s got two aspects to it.

“One is we’re back to great power, confrontation and conflict and right now, that’s all about Russia.

“But the future may be about a confrontation with China, who knows, let’s hope not, and secondly, in the way war is fought.

“The digital age is changing the way you fight wars and it’s not just drones and missiles and precision, it’s about robotics and autonomy and biosciences.

“So the Chief of General Staff has to change his army to deal with a much higher level of threat and he has to transform it for the digital age.