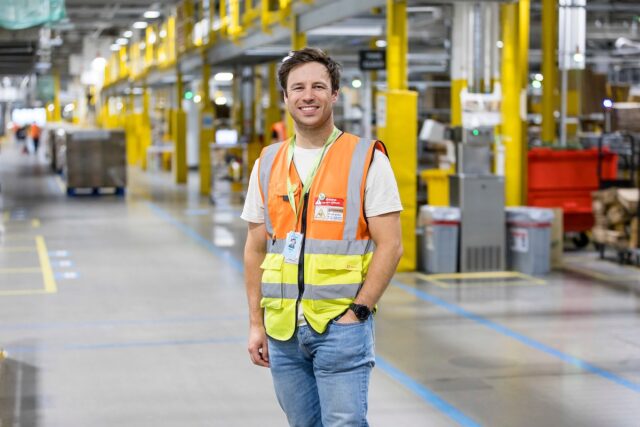 The team at the Amazon fulfilment centre in Tilbury is celebrating Armed Forces Day (25th June) by shining a light on some of the veterans and reservists working across Amazon’s UK operations network.

One of the veterans currently working at Amazon in Tilbury is Jason Jibb, who joined the company two years ago through the Amazon Military Programme.

The Amazon Military Programme offers members of the military community the opportunity to pursue a wide range of exciting new career paths at Amazon. This year Amazon will recruit (or has recruited) over 300 veterans, reservists and military spouses across the business in over 35 different jobs ranging from health & safety specialists, engineers, sales managers and team leaders to senior managers. These new employees join over 2,500 already employed at Amazon since it commenced its military programme in 2011.

The awards are dedicated to providing a much-needed platform for uncovering and showcasing the business achievements of ex-military, recognising the value veterans add to businesses as well as the employers that support the transition of servicemen and women. Amazon’s military onboarding plan, dedicated mentoring platform and thriving employee resource group ‘Warriors at Amazon’ continue to ensure our ex-forces have the best possible start to their second careers in Industry.

Amazon is also a proud signatory of the Armed Forces Covenant. The Covenant, originally introduced in 2011, has a focus on helping the Armed Forces community to access the same support from government and commercial services as the public.

Amazon first signed the Armed Forces Covenant in 2013 and renewed its commitment in 2021, vowing to uphold its key principles and to demonstrate its commitment to serving personnel, reservists, veterans and families.

Before joining Amazon over two years ago, Jason had a military career lasting eight years. He joined the Armed Forces after leaving university and began his officer training in Sandhurst.

Throughout his years in the military, Jason progressed through different roles including troop leader and second-in-command.

After serving for eight years, he decided to leave the Army in order to develop and focus on himself and other aspects within his life, leading him to joining the Amazon team, where he initially undertook the role as an area manager.

Speaking on why he joined Amazon after leaving the military, Jason said: “I was aware of the key underlining similarities between Amazon and the military. Through speaking to several individuals, they indicated that Amazon is less of a steep learning curve than other companies and this was appealing to me. In the armed forces, we develop abilities like leadership and team management, and this sets us up well for a career at Amazon. In addition to the shared qualities in both organisations, the work at Amazon also offers a platform to learn new things in an environment that could be considered quite familiar.”

For anyone who has recently left the military, or is thinking of leaving the military, Jason has some advice. “Have confidence in your ability and take the time to show a degree of humility. Take time to learn and understand, as I had to go back to the drawing board when I first joined Amazon. Try to re-learn certain skills and do not be afraid to ask for support.”