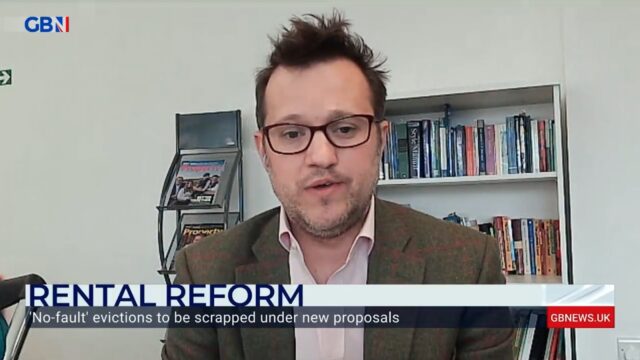 THE National Residential Landlords Association said proposals in the Government’s housing White Paper can work “with the right checks and balances”.

The proposed reforms of the rented housing market includes a proposal to ban no fault evictions, which allow landlords to remove tenants for no reason in two months.

NRLA CEO Ben Beadle told GB News: “We must bear in mind that actually government figures show that 8% of tenancies ended by the landlord, 92% are ended by tenants of their own volition.

“So, with the right sort of checks and balances here, we think it can work.

“But I think what might spook landlords a little bit is that the assured shorthold tenancy is being replaced by a periodic tenancy, which means you essentially start a tenancy on a rolling basis and tenants will be able to give two months notice at any time – that will disrupt the market a little bit.”

Mr Beadle was speaking in an interview with Liam Halligan during On The Money on GB News and said that landlords were not automatically opposed to reforms.

He said: “We certainly don’t rail against the plans to improve standards in the sector. We all want decent and safe homes and those homes that are damp or have a category one hazard need to be improved., it’s as simple as that.

“But it’s worth reminding ourselves I think 79% of the PRS [Private Rented Sector] already meets the Decent Homes Standard, so we’re dealing with a relatively small percentage.

“The backdrop to this is…the supply of homes, and I think what a lot of landlords will see in the White Paper itself is they may well be fearful about the direction of travel and I don’t think that that bodes well for the supply crisis that we are in the middle of.”

Mr Beadle said: “What I would say on no fault evictions is that just because the landlord doesn’t have to give a reason it doesn’t mean there isn’t one.

“One of the reasons why landlords are using no fault is because we have a broken court system that means it can take upwards of 12 months to get possession of your property.

“What we hope that the white paper will do and it does set it out is that in return for the abolition of section 21, we will see strengthened section 8 grounds that means landlords can get possession of their property for legitimate reasons.”

He added: “We certainly want to see a fair environment, that’s for sure.

“We don’t think it’s unreasonable that landlords should be able to deal with antisocial behaviour.”