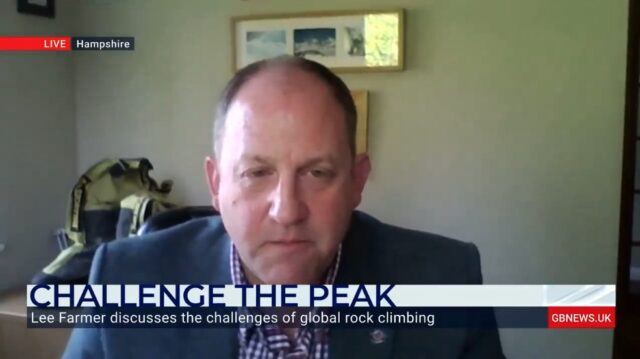 ONE of Britain’s top mountaineers has explained why a basecamp that has been used by generations of adventurers to scale Mount Everest has had to be moved due to global warming.

In an exclusive interview with GB News, Lee Farmer also discussed the difficulties of scaling the world’s highest mountain which has claimed the lives of over 300 climbers.

He explained that an increased rate of debris falling from a glacier by the camp forced the move by the government of Nepal.

“The Khumbu Icefall glacier itself is the area which mountaineers must climb,” he said. “It’s the most dangerous section of the climb, effectively.

“And straight out of basecamp is the ablation zone of the glacier which means it’s the edge where the ice is falling and the whole base camp is really based on the debris of that glacier.

“Of course, ice, which is this effectively frozen water, with heat it melts and then the ice wants to sort of move downhill.

“There’s a stream or a river which is getting wider and wider within basecamp and the Nepalese government has decided to move basecamp to a safe area.”

Speaking in an interview with Breakfast with Stephen and Anne on GB News, he added: “Most mountaineers aren’t thrill seekers, we don’t enjoy the danger, so if it makes it safe, then that’s a fantastic idea.

“Actually, in the 1953 expedition, the Sir John Hunt expedition they had a camp called Lake Camp which was near a small settlement called Gorakshep and they were actually on this icefall area.

“It’s very much a launchpad to get up the mountain itself.”

Mr Farmer described what it was like to reach the summit and showed the camera the huge boots he wore.

He said: “The actual summit is no bigger than a pool table at an angle. It’s not a broad large area.

“Sometimes you see photos of lots of climbers, standing there almost queuing to get on the top. The view is absolutely amazing.

“It’s a view that very few of us ever see and the clarity up there, because there’s no air pollution, means you can see for miles or miles.”

He said the mountain was littered with the corpses of fallen climbers who were left on the mountain because of the dangers involved in trying to recover them.

Mr Farmer said they were mainly in the “death zone” which is over 1,000 metres where there is not enough oxygen to support life and nearly all climbers resort to using breathing equipment.

He said: “Not all of them are sort of readily visible…off the top of my head, there are approximately 220 to 240 bodies up and down Everest, predominantly in the death zone both on the southeast and the northern side of the mountain

“It’s a cost of a living human life to try and reclaim or recover a body versus what a tragic event has already happened, so I think it’s that risk versus reward.