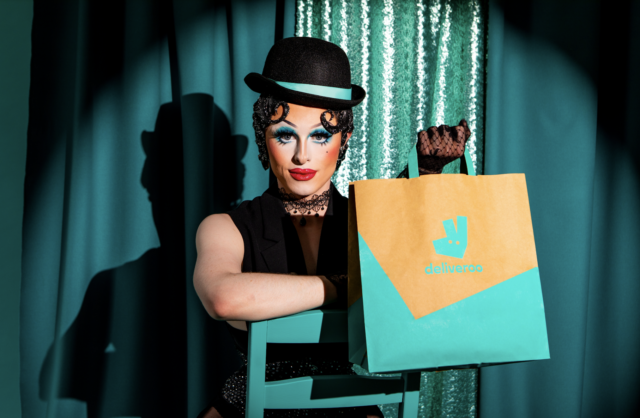 With performance at the heart of Pride, Deliveroo has partnered with queer performance charity, Raze Collective*, to celebrate 50 years of Pride, Cabaret and performance in the UK – by opening a Liza Minnelli-inspired deli shop – ‘Liza The Deli & Friends.’

From Saturday 25th to Sunday 26th of June, Deliveroo’s Soho pop-up, based in the heart of London, will provide visitors with an exuberant immersive ‘Liza’ performance by Drag Race UK vs The World winner Blu Hydrangea live from the pop-shop window, alongside several LGBTQ+ artists from Raze Collective that capture the essence of Cabaret culture.

The ‘Liza The Deli & Friends’ pop-up shop will allow consumers to ‘eat an icon’ and purchase a range of delicious and dazzling eye-catching food inspired by LGBTQ+ stars. The shop itself is named after Liza Minnelli, the star of Cabaret (1972) with both an LGBTQ+ champion and frontrunner in the community.

With all profits going to Raze Collective and being matched by Deliveroo, there is a recommended minimum £5 donation per item, where possible. Deliveroo will challenge customers to shimmy, shake, and sashay down the Cabaret catwalk, all in aid of Raze Collective, which will use the money to create opportunities for queer performers and help the performance sector flourish.

Upon arrival, customers will be greeted with an immersive Cabaret experience, with performances from ‘Liza’ live in the immersive shop window. Inside, velvet curtains drape the walls, Cabaret songs and other LGBTQ+ anthems will play, and smoke will fill the room. Bright theatre lights cascade the ceiling, and dancing performers dressed in traditional Cabaret outfits will line the catwalk leading consumers to the deli counter.

Beyond Blu, a host of LGBTQ+ talent from Raze Collective will be performing across the weekend.

Adam Spawton-Rice, Co-chair of the Deloveroo LGBTQ+ Network, said: “Deliveroo is a proud ally and here to support every bit of our community. That’s why we’ve partnered with Raze Collective to launch ‘Liza The Deli & Friends’ pop-up, celebrating the performers and performances that give us, as an LGBTQ+ community, strength this Pride month. Blu Hydrangea, alongside a new generation of LGBTQ+ talent, will be raising money for Raze Collective.”

Cassie Leon, Lead Producer at Raze Collective said: “Raze Collective are really excited to team up with Deliveroo this Pride season! Liza The Deli & Friends will give Raze Collective a great chance to take over more spaces with exciting, fun and creative queer cabaret.

As a charity that supports the nurturing of queer performance we are always on the look out for unique spaces to perform in. This amazing deli will be the perfect place to highlight, showcase and celebrate queer performers.”

Blu Hydrangea said: “Performance is an essential part of Pride, which is why it’s so fitting that Deliveroo is launching ‘Liza the Deli & Friends’, a pop-up that celebrates all things performance. Alongside the incredible talent at Raze Collective, I will be performing as Liza for the first time in her-story (eek), all to raise money to support Raze Collective in continuing doing great work for queer performance in the UK.”

This isn’t the first time Deliveroo has supported the LGBTQ+ community. Last year, Deliveroo launched a reimagined version of alphabet soup featuring only the letters LGBTQQIAAP to emphasise the broad spectrum of identities. In addition, Deliveroo has launched School for Allies, an online educational resource for riders, restaurateurs, and customers, which aims to protect and improve the lives of LGBTQQIAAP Deliveroo employees.

The ‘Liza The Deli & Friends’ pop up shop invites customers to come and watch incredible LGBTQ+ performers and sashay down an immersive catwalk to purchase delicious treats inspired by some of the world’s best performers, all in aid of raising money for Raze Collective.