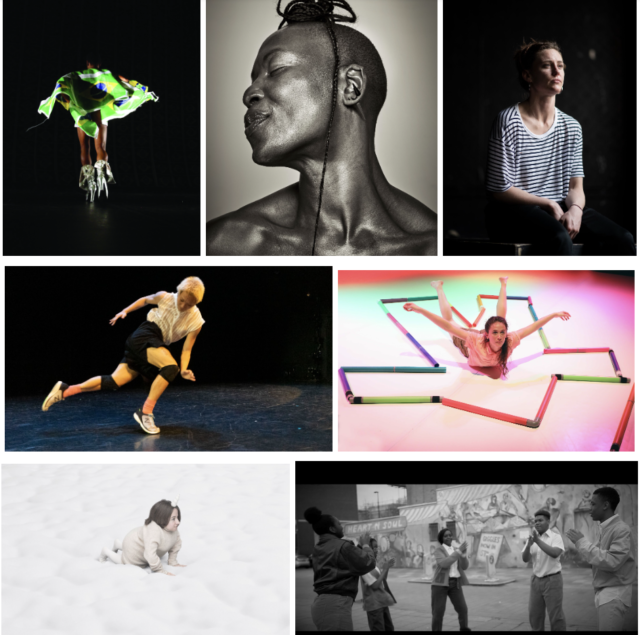 Artistic Director and Chief Executive Freddie Opoku-Addaie’s first full Dance Umbrella festival will take place from 7 – 23 October across the capital and via danceumbrella.co.uk.

Freddie Opoku-Addaie said ‘I am buzzing sharing this year’s programme which is filled with talent, invention, intelligence and ferocity. An intersectional mix of female artists lead the charge and I am proud to be able to platform multiple exceptional artists who have not been presented in London before. Amongst the international line-up you will find eight UK premieres over 17 days in 12 locations. Online, we have four world class dance films, panel discussions and the return of our popular Choreographer’s Cut series. From Sound System culture to Seeking Unicorns – there will be something for everyone to enjoy and be inspired by across our beloved global city.’

Award-winning choreographer Oona Doherty (Northern Ireland) makes her Sadler’s Wells debut, returning to Dance Umbrella after critically acclaimed productions Hard to Be Soft and Hope Hunt and the Ascension into Lazarus, with the UK premiere of her latest, large-scale work Navy Blue. Using her distinctive and visceral choreographic style, Doherty creates an unsettling atmosphere as a dark night descends and a group of 12 dancers generate a sense of dread, trapped within a destructive algorithm. Featuring music from Sergeï Rachmaninoff and Jamie xx this new piece considers where we have been and where we are heading, as it urgently appeals for societal change. Doherty’s films Hunter and The Devil also feature in this year’s Film Programme.

Italian performer, director and choreographer Chiara Bersani (Italy) brings her award-winning work Seeking Unicorns to the National Gallery for its London Premiere. Exploring the concept of the ‘Political Body’, Bersani’s latest work centres on the experience of the unicorn. Historically abused and misinterpreted, the work seeks to give the unicorn its own voice and story, asking ‘..If tomorrow you find me in your garden, what would you do?’ Seeking Unicorns won the Total Theatre & The Place Award for dance at the Edinburgh Fringe Festival 2019.

Multi award-winning international artist, nora chipaumire (Zimbabwe/USA) makes her Dance Umbrella debut at Bernie Grant Arts Centre with the World Premiere of ShebenDUB an audio-visual dub culture adventure. Part gig, part dance performance, part social event, chipaumire celebrates the creative and law-defying possibilities of dub, maintaining that of the many African diasporic inventions, dub is the most provocative and questioning. chipaumire will be joined by international artists including tyroneisaacstuart (UK), Yinka Esi Graves (UK/SP) and Marguerite Hemmings (US). There will also be a panel discussion and an opportunity to see the build of the installation of the show’s environment on site. nora’s film #PUNK also features in this year’s film programme, giving audiences a chance to see more of this innovative artist’s work.

Dance Umbrella’s Four by Four next generation international talent commissioning programme culminates with the World Film Premiere of Abby Zbikowski (USA) and the New Utility’s Radioactive Practice. Abby was selected by Stephen Petronio for the commission in Dance Umbrella’s 40th year. After covid-related delays, the piece finally had its first performances in New York’s Times Square this year, where it was filmed for its on -screen Dance Umbrella premiere. Featuring an original score by Raaphael Xavier that draws inspiration from hip-hop, metal and post punk, Radioactive Practice explores a full arsenal of physical possibilities to test its performers to their physical and mental limits. This genre-bending performance will challenge audience perceptions of what dance can be.

Combining Philippine folk dance, classical, hip hop and vogue Joy Alpuerto Ritter’s (Germany) solo BABAE is inspired by the “masterpiece of strangeness”, Mary Wigman’s Witch Dance. Linda Hayford (France) uses popping to communicate her state of mind in the introspective, breakthrough solo creation Shapeshifting. Working with composer Abraham Diallo, Hayford’s evocative style conjures an otherworldly existence as she passes from one form to another. In Brazilian artists Luiz de Abreu and Calixto Neto’s profound solo work O Samba do Crioulo Doido, choreography is passed from one black body to another. By playing with stereotypical elements such as samba, carnival and eroticism, the piece mocks clichés and offers a humorous criticism. Calixto Neto’s documentary O Samba do Crioulo Doido: Ruler and Compass is also featured in this year’s film programme, providing fascinating insight into the making of and passing on of this radical work as Abreu ‘transfers’ the piece to Neto following his recent experience of sight loss.

Alleyne Dance (UK) and the local community in Lewisham are co-creating a brand new large-scale outdoor performance, Close to Home: The Mass Dance Event, which features an intergenerational cast of 200 – 400 performers. Highlighting themes of change and activism, the work will explore stories of Lewisham and celebrate the positive impact of migration on the community. Founded in 2014 by twin sisters Kristina and Sadé Alleyne, Alleyne Dance’s choreographic aesthetic reflects a background in athleticism and blends West African, Caribbean, Hip Hop, Kathak and Circus styles. Bringing the festival to a close, Close to Home is part of Lewisham London Borough of Culture.

This year’s Orbital Tour, to 6 venues in every corner of London, including a first time visit to Studio 3 in Barking and Dagenham, is the UK premiere of a family show from de Stilte (Netherlands). Do-re-mi-ka-do creates a world where everyone can join the party, as sound, colour and movement combine to take family audiences into a limitless world of imagination, where play is encouraged and creativity knows no boundaries.

In its second year as hybrid festival Dance Umbrella has again produced and selected a number of digital works for our global and national audiences, including stunning films, sector focused panel talks, and unique in-conversation content giving exclusive insights to artists’ creative processes and more. In addition to films already highlighted and a number of post show talks, award-winning Candoco (UK) and Boy Blue (UK) present Forging Paths. The two companies – both celebrating landmark anniversaries this year – come together in-conversation with artist, academic and dramaturg Dr Funmi Adewole to talk about how they forged their paths within the dance sector, in the UK and beyond.

Dive into some of the most exciting minds in contemporary choreography as Dance Umbrella’s Artistic Director Freddie Opoku-Addaie chats to guests in this year’s edition of Choreographer’s Cut. These fascinating conversations about a specific work selected by each choreographer, this year features: Saburo Teshigwara (Japan) who was awarded the Golden Lion for Lifetime Achievement at the Venice Biennale this year; Wendy Houstoun (UK) and Hetain Patel (UK).

Dance Umbrella’s Digital Programme can be accessed by purchasing The Digital Pass, which is Pay What You Can (minimum £5) and will give audiences exclusive access to the entire digital programme within this year’s festival. All content will be released on the first day of the 2022 festival (7 October) and will be available on demand until Monday 31 October.