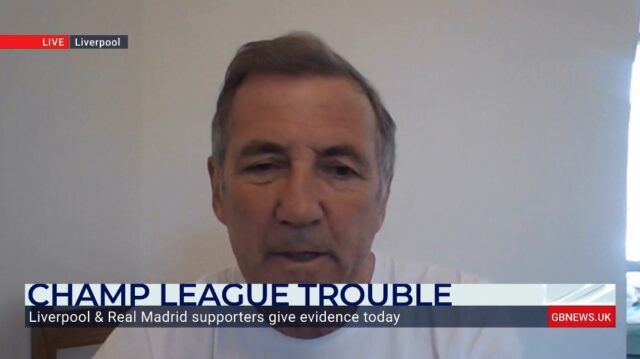 LIVERPOOL football legend Alan Kennedy has revealed that he nearly died in a crush in Paris ahead of the Champions League final.

Alan, 67, said he would be willing to give evidence to any enquiry into the violence that marred the event, with police accused of over-use of tear gas and pepper spray against Liverpool fans.

He described his experience ahead of the Real Madrid clash telling GB News: “It was a scary night. It was the most frightening experience I have ever had in a football stadium.

“I was like every other supporter. At the time, I was finding my way into the stadium and my son was helping me along the way and we seemed to get funnelled into an end where there wasn’t, there was no answer, there was no end to it.

“And I eventually was hauled over a fence which must have been six to eight feet high by a couple of lads and my son and I were out of danger at that particular time but I’ll tell you I was close to death.”

Speaking during an interview with Eamonn Holmes on GB News, he said he would be willing to tell an inquiry about his experience so that a similar situation does happen in future.

“I was that scared. I’ve never been in that situation before and I never want to see it again,” he said.

“And hopefully when they have this investigation, they will go through all people’s [experiences] at that particular time and come up with hopefully the right answer.

“They were having problems that obviously there were one or two forgeries going about at that particular time but nobody seemed to be funnelling you in the right direction.”

He added: “No matter where I went, I had problems and again, being hauled over an eight-foot high fence wasn’t the ideal action, and it’s just as well I did because I think I would have been in real trouble.

“So that was really the big, big problem…can I just say all the police, OK, who worked fine at the time, but they used the pepper spray a little bit too much for my liking.

“They thought everybody was a troublemaker and they would instantly get it out and flashed it in your face.”

Alan said he backed an inquiry to discover what went wrong on the night: “I felt uncomfortable. I felt threatened. I felt claustrophobic. I felt as though I might not get out of this.

“If I can help in some way I certainly would.”