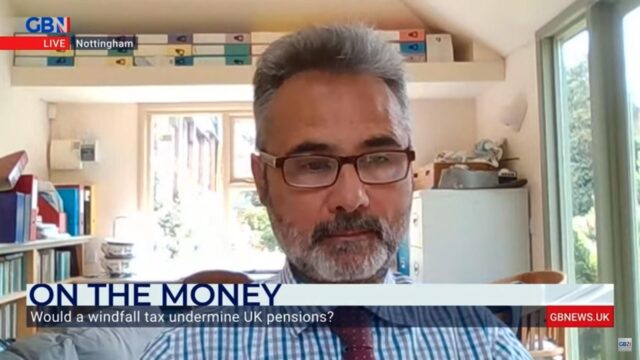 EXPERTS have attacked claims from big oil firms that imposing a windfall tax to ease the cost-of-living crisis would affect the pension pots of millions and hit investment.

Pensions consultant John Ralfe said it would represent a small amount, perhaps raising £2 billion in total with a 20% surcharge on firms, and that this would pale into insignificance compared to the vast profits they are making.

“So if in the future, for whatever reason, North Sea profits are down, then companies actually make losses.

“Then there’s a symmetry involved, and they get a tax rebate, rather than simply all the banging of the drum and saying this is absolutely outrageous.”

He was speaking to Liam Halligan during On The Money on GB News and went on to point out that one of the biggest threats to investment is uncertainty, so removing that allows companies to plan.

“There is an argument for saying once you have made a decision, and that decision has been communicated, increasing the surcharge from 10% to 20%, everybody breathes a sigh of relief and says ‘oh, actually, that’s okay, we know where we are, there’s a degree of certainty, we the companies can plan, we investors can plan’.”

Mr Ralfe added: “The percentage of shares of BP and Shell owned by UK pension funds is small – it really is small…

“BP has a market capitalisation of £78 billion pounds. It’s a huge company. Shell is more than twice the size at £170 billion.

“The boss of BP a couple of days ago said it wouldn’t impact investment.

“It feels as though the arguments against this are falling…it’s important to think about the bigger context, which is that the North Sea oil tax regime is one of the most generous in the world.

He added: “I think it’s important when we’re talking about the tax rate to look at where we’re starting from this huge tax subsidies that these companies got only a few years ago – Shell was actually being paid by us by the taxpayers…