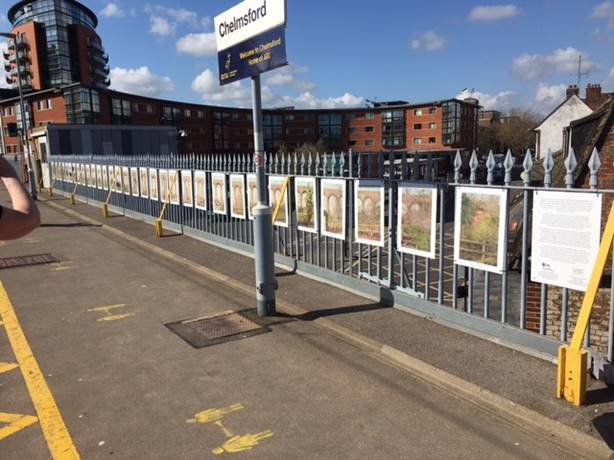 A platform at Chelmsford station has been transformed into a representation of Essex’s famous Chappel Viaduct to encourage tourists.

Local artist, Wladyslaw Mirecki, painted watercolours of every arch of the Viaduct’s eastern façade – 32 in total – between 2019 and 2021.

The Essex & South Suffolk Community Rail Partnership have worked with him to bring prints of the paintings to Chelmsford rail station’s platform where they have been placed along the railings to show the entire Viaduct.

The Community Rail Partnership hopes that the display at Chelmford will encourage people to explore the area by train.

Jayne Sumner, Rail Engagement Officer for the Essex & South Suffolk CRP, said, “Travelling on the Gainsborough Line to Chappel & Wakes Colne is really worth doing – not only to see the Chappel Galleries, the Viaduct and the East Anglian Railway Museum but also the beautiful countryside around the line and the lovely market town of Sudbury, birthplace of the 18th century artist Thomas Gainsborough.”

The Chappel Viaduct is an iconic part of the area’s history. Built in the late 1800s by Peter Bruff to span the River Colne, the 320m long bridge is considered one of the largest brick-built structures in Great Britain.

Seven million bricks, made from clay excavated from the nearby village of Bures, were used in its construction.

Wladyslaw Mirecki is a local self-taught artist who has painted all his life including during his science degree, as an industrial designer and as a co-proprietor of Chappel Galleries since 1986. His work has recently been acquired by the National Railway Museum, York, and the Fitzwilliam Museum, Cambridge, as part of their permanent collections.