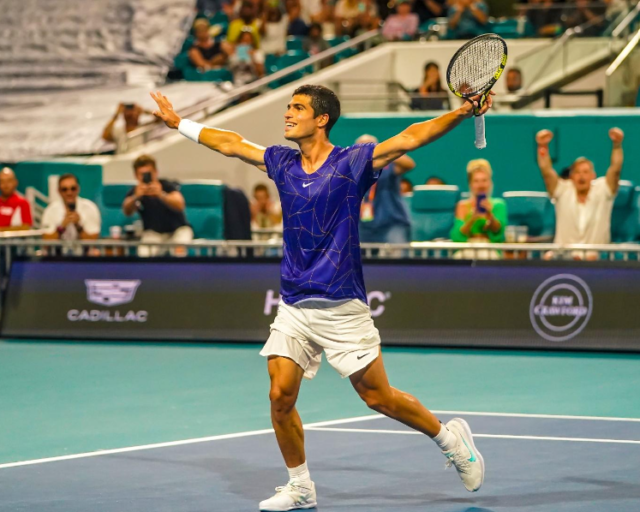 The last couple of years have been an exciting time for men’s tennis. Indeed, Novak Djokovic and Rafael Nadal are still adding Grand Slam victories to their lengthy list of titles on a regular enough basis — battling it out against each other in the aim to end their playing days as the most successful player of all time.

But young, up-and-coming players are slowly beginning to break the mould that Djokovic, Nadal and Roger Federer have formed at the top of the men’s singles tree for far too long. Of course, it’s worth noting that it has been a slower than expected process at this stage — with only Dominic Thiem and Daniil Medvedev, the last two winners of the US Open, sticking their oars into the Slam waters thus far.

But it seems only a matter of time before the tides really do begin to turn in the young guns’ favour. The likes of Stefanos Tsitsipas, Alexander Zverev, Medvedev and Thiem are all beginning to become more regular names in the latter stages of the Grand Slams — with nine final appearances between them since 2019, which is why it’s hard to believe that there are just two major titles between the four players.

However, with the help of the exciting Carlos Alcaraz, the new generation’s bid to truly knock Djokovic and Nadal off their perch has been dealt an extra hand. After winning the Next Gen ATP Finals, the 18-year-old has really burst onto the scene this season — winning the Rio Open in February before dual successes last month, lifting both the Miami and Barcelona Open titles to enter the top 10 in the world rankings.

His raw speed and sheer determination has drawn comparisons to his Spanish compatriot Nadal, and his recent wins on both sides of the Atlantic Ocean have resulted in him entering the French Open odds as the second favourite at 13/5 — meaning he is behind only Nadal in the market, and more favoured than the likes of Djokovic and last year’s finalist Tsitsipas.

There is a chance history is about to repeat itself as well. If you delve far enough into the achieves, going back to 2005, you will find that a certain 18-year-old Nadal won the Barcelona Open to break into the top 10 for the first time — just like Alcaraz — and what did he do next? He won the 2005 edition of the French Open!

Of course, winning the clay-court Slam is easier said than done. The ‘King of Clay’, Nadal himself, will be hoping to regain his crown for a record-extending 14th time after being beaten in the semi-finals by Djokovic last year, while the Serbian will also be out to defend the title after missing out at the Australian Open already this year — which allowed Nadal to pull clear of him in the major count with 21 Slams now to his name.

That’s not including having to compete with the likes of Zverev and Tsitsipas as well, two players who have proved they can go far at Roland-Garros and will feel they should have added a Grand Slam title to their resumés by this stage of their respective careers.

Experience of playing in the main tournament of the French Open last year, when he reached the third round before being beaten in straight sets by German Jan-Lennard Struff, is something that Alcaraz can use to his advantage and there’s no doubt that he’s a much better player 12 months on from that defeat.

Indeed, Scottie Scheffler, who has had a similar rise to Alcaraz in the world of golf, proved that form and momentum is everything in solo sports when he built upon a few maiden wins to secure the coveted green jacket at the recent renewal of the Masters and perhaps the Spaniard could follow suit in Paris.

Even if Alcaraz does come up short in this year’s French Open, we have no doubt that he will go on to win the tournament several times throughout his playing days. He might not match or beat Nadal’s record on the clay courts of Roland-Garros, but it would be no surprise to see his name on the roll of honours seven or eight times over the next 15 years!