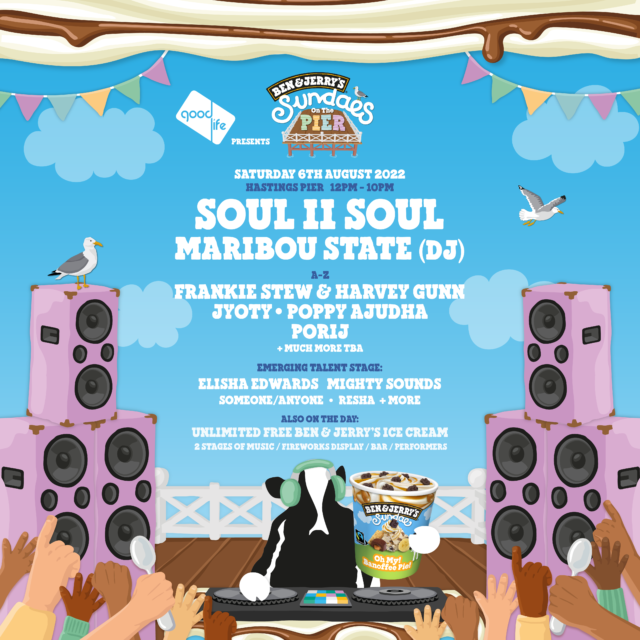 This festival season, dig out your flip flops and pop on your bucket hat as Ben & Jerry’s is bringing back its successful festival series ‘Sundaes On The Common’, but this time we’re heading to the BEACH. Introducing ‘Sundaes On The Pier’ – set to be bigger and better than ever before.

Taking over Hastings Pier on Saturday 6th August (we know, Sundaes on a Saturday), Ben & Jerry’s will be rocking-up to the southeast coast with a stage chock-a-block with live music and more free ice cream than you can shake a spoon at.

The out-of-this-swirled line-up is headlined by Grammy Award winners and iconic R&B collective, Soul II Soul alongside chart topping electronic music duo Maribou State. Also joining them at the festival will be a whole host of incredible music talent, including Poppy Ajudha, Jyoty, Frankie Stew & Harvey Gunn, and Porij, with more still to be announced.

Sundaes On The Pier festival goers will be treated to a whirlwind of attractions inspired by Ben & Jerry’s chunkiest and swirliest flavours yet from the new Sundaes range which includes Cookie Vermont-ster, Hazel-nuttin’ but Chocolate, Oh My! Banoffee Pie! and Non-Dairy Berry Revolutionary. Revellers will also be challenged to scale the enormous Cookie Dough climbing wall (you heard that right!) and frolic in the Banoffee Pie ball pit, all while enjoying bucket loads of ice cream.

Tickets are just £5 each – made even sweeter with all proceeds (we mean every single chunk and swirl) going to local Hastings charity The Refugee Buddy Project who support people from refugee backgrounds.

Victoria Witter, Resident Office DJ at Ben & Jerry’s said – “If there is one thing better than a creamy tub of whipped Sundaes on a summer’s day, it’s rocking out to an entire Sundaes-inspired festival by the beach! Sundaes On The Pier takes Ben & Jerry’s fun-filled festival experience to a whole new level, with amazing acts, better attractions and even more ice cream! As Ben & Jerry’s resident office DJ, I’m super excited to hand over the playlist responsibilities to the professionals for one day only so I can kick back in the sun.”

To be in with the chance of bagging a pair of tickets to this summer’s coolest festival, sign up here. Lucky ticketholders will be randomly selected, notified and invited to secure their pair of tickets on 10th June with proceeds from the £5 ticket going to The Refugee Buddy Project. T&Cs apply.