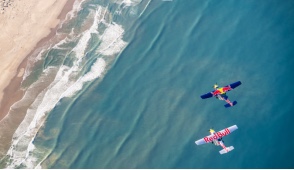 Red Bull Air Force members and cousins Luke Aikins and Andy Farrington will attempt to make history and test the limits of aviation with their latest aerial project, Plane Swap.

In a world first Aikins and Farrington will pitch their planes into a synchronised nosedive at 14,000 feet (4,000m), stop the engines, while a custom-manufactured airbrake will hold the planes in a controlled-descent speed of 140 mph (225kph). The pilots will then exit their respective aircraft and skydive into each other’s planes, crossing over each other mid-air and regain control – all under 1 minute.

The duo will push their potential to the limit in a career-defining moment that will be a trailblazing milestone in the history of aviation.

Pilot Luke Aikins says: “Plane Swap is the pinnacle of my career and my goal is to inspire the world and show that anything is possible. You can set your mind on something that at times seems wild, crazy and unattainable, but through ambition and creativity, you can make it happen.”

Following in the footsteps of Dario Costa, who broke world records when he flew a plane through a set of narrow tunnels in Istanbul, Turkey in September 2021, Plane Swap will push the boundaries of human potential.

Clocking up speeds of 152 mph (245kph), Costa had to negotiate tunnels with just a few metres between the tip of the wings and the solid concrete walls. With 2.26km being covered in a mere 43-seconds, Costa was required to have reaction times of less than 250 milliseconds to account for changes in air pressure within the tunnels and crosswind complications in the gap between the two tunnels. All this, while maintaining a height between 70cm and one metre above the slowly inclining surface of the road.

The feat set five records, among them being the official Guinness World Record for ‘Longest Tunnel Flown through with an Aeroplane (1,730m)’.

Now, just under 220 days since Costa’s flight it is Aikins who is attempting the next major aviation moment, but it isn’t the first time he’s been involved in such a large undertaking. In 2012, he had the role of skydiving consultant on the ground-breaking Red Bull Stratos project which saw Austrian skydiver Felix Baumgartner break records when he took a supersonic space-jump to earth from the stratosphere using a helium balloon.
And now Aikins and Farrington – teammates, cousins and accomplished skydiving masters – will tackle their own feat. The Plane Swap concept is Aikins’ brainchild, inspired by a 1990’s photo in an aviation publication and manifested over a lifetime of aviation experiences, he is an acclaimed skydiver with more than 20,000 jumps, commercial aeroplane and helicopter pilot, innovator and coach.

Hours of research and development have gone into the plane modifications required to ensure the feat is possible. Dr. Paulo Iscold, world renowned aeronautical engineer, partnered with Aikins and Farrington to serve as lead engineer. One of the major challenges was developing a methodology to hold the planes, a pair of Cessna 182’s, in a controlled vertical descent – the exact opposite of how autopilot systems are designed to function.

This required the reverse engineering of the autopilot mechanics, and resulted in an innovative, purpose-built airbrake system installed on the aircraft belly, designed to control aerodynamic stability. Once engaged, it will ensure the planes maintain a relatively controlled terminal velocity in nosedive that closely matches the speed of the skydiver’s descent.

“We very quickly realised in the project development that there would be key components we thought would be solved one way, but would instead need to be solved another way,” said Dr. Iscold. “You know, you can’t just point the airplane straight down and think it will fly towards that point. You have wind and many other factors that impact the outcome of the project. You think things are going to go one way, but, through the project course, correct themselves and go another way.”

Among Luke Aikins many achievements, are serving as the skydiving consultant on the Red Bull Stratos mission and jumping from an aircraft without any parachute or wingsuit, at an altitude of 25,000 feet (7,620m) and successfully landing in a net, all watched by a live audience.

Andy Farrington serves as the perfect accomplice, as he is both an accomplished pilot with 6,000 flight hours logged and boasts more than 27,000 skydives and 1,500 BASE jumps.