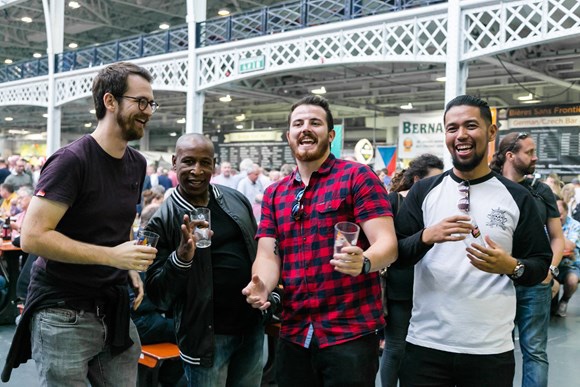 There’s just 100 days to go until the Great British Beer Festival opens its doors to the public – boasting over a thousand British and international beers, ciders, perries, wines and dedicated gin bar.

Britain’s premier beer festival will be returning to Olympia London from 2-6 August 2022 following a two-year hiatus due to social distancing measures and crowd restrictions during the COVID-19 pandemic.

The Great British Beer Festival, now in its 45th year, will once again feature quality live beer served from across the British Isles. Craft brewers will join stalwarts of the brewing industry in a collaborative effort to celebrate and showcase the very best beer Britain has to offer.

Recent brewery sign ups include Brew61 and Vocation, who will be joining the likes of Harvey’s, Titanic and Adnams. New sponsors Wetherspoons and Beer52 have also been confirmed.

This year visitors can also sample some of the very best cask beer America has to offer, thanks to a cask beer exchange set up between the Great British Beer Festival and the Great America Beer Festival. This makes GBBF the sole destination to find quality American brew in cask – a rarity even across the United States itself, where keg is predominant.

Tickets are now on sale – entry is £20 and visitors will receive a souvenir glass, programme and two half-pint tokens to kick off their day of beer tasting. VIP and corporate ticket packages are also available.

Adnams – established in 1872, Adnams make amazing beers and spirits from grain-to-glass in their east coast home of Southwold.
Anspach & Hobday – founded by home-brewing school friends, Anspach & Hobday brew quality ales, porters and lagers from the heart of London with a strong influence of tradition and a keen eye on the future.
Arkells – at 175 years old, Arkell’s Brewery is one of the few family breweries left in the UK, established as an offshoot to the family farm near Swindon when Isambard Kingdom Brunel was building his Great Western Railway locomotive works.
Bedlam– based at the foot of the South Downs just outside the vibrant city of Brighton with a core range of four cask conditioned beers complemented by an ever-changing range of exciting seasonal, limited-edition ales.
Bishop Nick – an Essex-based brewery that has won a number of awards including Silver Supreme Champion Beer of Britain in 2017.
Black Storm – Born in 2017 to create great beer that brings people together which has since grown into a nationally distributed beer brand.
Bradfield Brewery – a family run brewery based on a busy working farm in the Peak District. Using the finest malts, traditional hops and natural spring water from their own borehole they produce a range of distinctive and award-winning cask conditioned real ales.
Brew61 – located on a farm in Bronsgrove, Brew61 beers are light in taste and colour, fresh, lively and vibrant with a clean, fresh palate, all inspired by the fresh smells and tastes of the countryside on a Spring Day.
Five Point Brewing – The Five Points Brewing Company is an independent brewery based in Hackney, East London, brewing with a commitment to quality and the community since 2013. The Five Points champions flavour, provenance and consistency, and their range of award-winning beers are unfiltered and unpasteurised for better taste and aroma.
Harvey’s – Using a blend of local hops, water filtered through the Sussex Downs over 30 years and Harvey’s unique 60-year-old yeast strain, Harvey’s beers are the embodiment of Sussex.
Iron Pier Brewery & Taproom – Iron Pier produced their first beer in January 2018. Primarily focused on cask beer, with an additional barrel ageing programme to provide beers aged over months and years in oak barrels, they have since expanded to provide can and keg beer, all brewed and packaged onsite.
Ossett Brewery – A progressive and passionate independent brewery located in the heart of Yorkshire. Crafted over two decades, they’ve perfected the science of producing ales of consistently high quality and honed the art of brewing beers that are loved by all.
Quantock Brewery – born out of a love of brewing by head brewer and former nuclear engineer Rob Rainey, Quantock continues to explore new ideas and add to their ever-growing range of beers crafted in the heart of Somerset.
Saltaire Brewery – Truly independent, Saltaire has been making internationally award-winning beer this way since 2006. Based in West Yorkshire, they make tasty beer in all formats to send around the UK and across the world.
Siren Craft Brew – Siren Craft Brew was born in 2013 with a simple idea in mind: to introduce exciting, full-ﬂavoured and forward-thinking beers to as many people as possible.
Three Tuns Brewery – In the heart of Shropshire, this 17th Century brewery holds tradition in the highest regard, which is why its legendary ales are made the traditional way, using only the finest ingredients to give each one its own unique Three Tuns Brewery flavour.
Titanic Brewery – brewed in the creative and industrial heart of the West Midlands, two Staffordshire brothers have owned and run Titanic for over 30 years.
Vocation – In 2015 Vocation Brewery was born, with one member of staff, a rebuilt chicken shed, and a dog for company. Today they have around 60 staff, and sell the equivalent of 10 million cans per year. From their core range to collaborations, Vocation’s beers always hit the spot.
The Wild Beer Co – Based on a Dairy farm in rural Somerset in 2012, The Wild Beer Co was born out of a love of fermentation, barrel-ageing and most importantly, flavour.
Tickets to the Great British Beer Festival can be purchased at https://gbbf.org.uk/