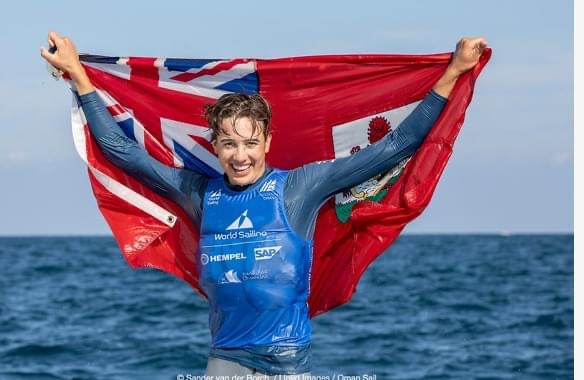 Sebastian, age 16, a full boarding pupil and sailing scholar from Bermuda, performed consistently well all week, and held second place until the final day where he sailed into the lead securing first place in the Men’s Laser Radial class.

Simon Lockyer, Headmaster, comments: “We have a specialist Sailing Academy at the Royal Hospital School and I am delighted that we have secured our first World Champion from our dedicated programme. Sebastian and his family chose RHS from many schools around the world, a place where he could balance his academics alongside his sail training. We are delighted that such a talented young man has been able to secure his dream to be Youth World Champion whilst he is at school with us. We look forward to watching his progress over the coming years on the world stage.”

Sebastian’s win gives Bermuda its first gold medal in the youth championship category. He follows his father Somers Kempe, who competed in the same competition 30 years earlier and who was there to greet his son at the finish line. Paying tribute to his father, Sebastian comments, “I want to thank my dad and everyone back home who has supported me.”

Ed Sibson, Director of Sailing at RHS, adds, “I am delighted that Sebastian’s hard work and dedication has paid off. He is one of the most talented young sailors I have ever worked with; he has a world champion mindset, getting up before breakfast to run and train in the gym before the school day begins. He is dedicated to his training plan and we are delighted to have supported him with his racing schedule by sending out Shaun Priestley, our race training coach, to be with him in Oman. Sebastian is extremely versatile across a wide range of boats and has been a valuable team member in some of our recent school competition successes.”

Nicole Stovell, age 16, who finished 32nd in the Women’s Laser Radial class and is also from Bermuda, will be joining the School as a full boarding sailing scholar in January 2022.

The RHS Sailing Academy is a Royal Yachting Association recognised training centre based at Alton Water reservoir, located just 5 minutes from the main school campus and has a fleet of RS Tera, Topper, ILCA, RS Feva, RS200, 29er and Waszp racing dinghies and more. Talented young sailors from across the region, UK and from overseas consider RHS to be a school where they combine their studies with specialist sailing instruction and race training.

At RHS, all school pupils joining in year 7 learn the technical aspect of navigating a dinghy and have the opportunity to join the Sailing Academy. The academy provides regular time on the water and holistic support to the school’s elite level sailors, supporting them to compete at the highest level nationally and internationally.