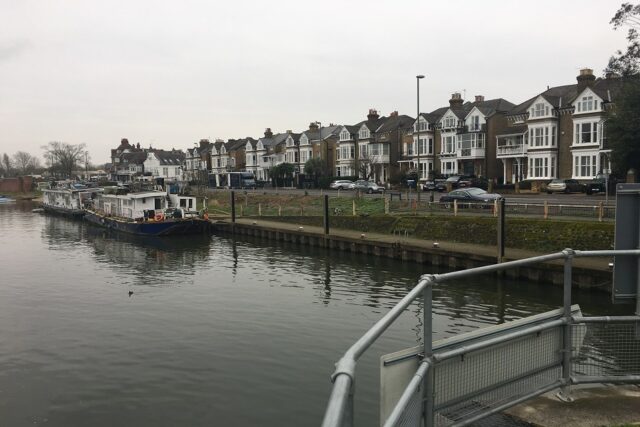 The owner of two boats has been fined £800 and ordered to pay costs of almost £21,000 for obstructing a busy part of the River Thames.

Alistair Trotman broke safety byelaws when mooring the barges he rented out as accommodation at one of the busiest sections of the river, at Molesey Lock in Surrey.

The Environment Agency took the 55-year-old to court for compromising the safe passage of other boats through the lock. Trotman kept Kupe and Rhythm of River, each 25 metres long, in the same spot next to Environment Agency land for months.

Boats moored permanently without the consent of the landowner can only remain stationary on the non-tidal Thames for up to 24 hours – and mustn’t cause an obstruction to other traffic.

Staines magistrates’ court last year convicted Trotman, who lives on board Kupe, at Kingston upon Thames, of berthing the boats for longer than legally allowed. He was also guilty of ignoring orders from the Thames harbour master to move them.

Colin Chiverton, environment manager for the River Thames at the Environment Agency, said:

“Trotman showed contempt for the rules. He moored both boats illegally in the same place for almost six months, disregarding harbour master directions. Most boats using our locks do so lawfully and continue along the river. Trotman’s £800 fine and nearly £21,000 costs, instead of the taxpayer footing the legal bill, show the result of not doing so.

“We urge all Thames boat-owners to consider the size and type of vessel they use and how to comply with mooring requirements.”

The court heard evidence from Environment Agency officers that Trotman’s inconsiderate actions exposed other boats and their crews to obstruction and possible danger.

Trotman refused to accept he was in the wrong at any point between October 2018 and the following March. He didn’t move the boats from the Environment Agency lay-by at Molesey, failing to accept they were blocking the channel into the lock.

District judge Susan Cooper ruled in favour of the harbour master’s evidence the boats “were likely to affect the navigation of other vessels” in a stretch of water narrowed by Trotman’s actions.

Trotman did move Rhythm of River a few metres from its original position after being warned legal action was a possibility, but he was still in breach of the harbour master notices issued against both boats.

When Trotman refused the agency’s instructions to move the boats in March 2019, waterways officers towed them away from Molesey Lock, with Trotman still inside Kupe. He refused to come out to talk to agency staff, who had tried to contact him through documents posted on the vessels, phone calls and letters.

Powered and unpowered boats on the river shouldn’t obstruct other traffic or interfere with land next to the river. The Environment Agency maintains more than 600 miles of inland waterways across England, keeping them open and safe for thousands of river-lovers.

In keeping the boats in place and failing to comply with the harbour master’s two notices to move the boats, Trotman breached the Thames Navigation Licensing and General Byelaws 1993 and the Thames Conservancy Act 1932. He was fined £200 for each of the four offences.

At Staines magistrates’ court on 19 January, Trotman was ordered to pay the Environment Agency’s costs of £20,591.40 and a victim surcharge of £80.