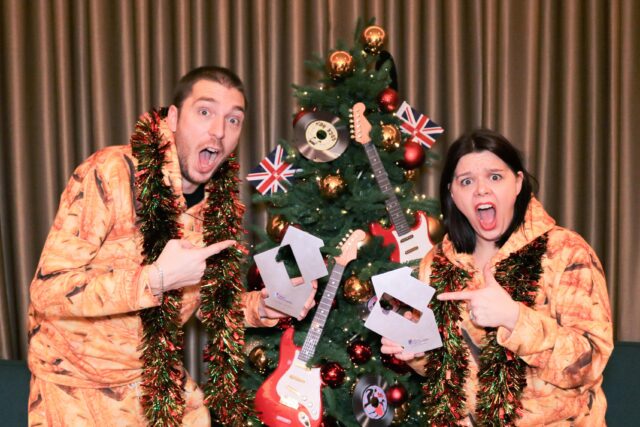 The race to secure the coveted Christmas Number One spot is now in full flow – in fact, we will know exactly who tops the tree in just eight day’s time.

Now one of the great festive traditions, the Christmas charts began with Al Martino and his ballad Here In My Heart. The Beatles secured four throughout the sixties, while Sir Paul McCartney regained his crown with Wings’ Mull Of Kintyre in 1977 – bookmaker William Hill taking the first ever bets on the festive chart-topper.

Claiming the festive top spot is an institution. From the Spice Girls and Whitney Houston to Mr Blobby and LadBaby, from music icons, cartoon characters and punk rockers, to TV talent show winners, and all-star charity records; what will play out between now and the all-important announcement at 17:45 on Friday December 24, will be the most unpredictable chart race of the year.

Seven decades after the very first Christmas Number one, the battle for the 70th Christmas Number One rages as fiercely as ever. Here, bookmaker William Hill takes a look at this year’s runners and riders…

LadBaby – 1-8 – The sausage roll loving YouTuber from Nottingham, real name Mark Boyle, equalled a record set by The Beatles and the Spice Girls in clinching a third successive Christmas Number One last year, with Don’t Stop Believin’. And now, with a little help from fellow contenders Ed Sheeran and Sir Elton John, they could overtake the Spice Girls and The Beatles as the act with the most consecutive Christmas Number Ones – all in the name of a food bank charity, the Trussell Trust.

Ed Sheeran and Sir Elton John – 5-1 – Chart superstar Ed Sheeran has teamed up with friend, mentor and all-round music icon Sir Elton John, to create three new Christmas songs, the first of which is called Merry Christmas. The pair’s charity video parodies a number of other famous festive hits, while a whole host of celebrities have been persuaded to make guest appearances. The track is currently on course for a second week at number one.

Have A Word Pod – 20-1 – UK comedic duo Adam Rowe and Dan Nightingale have fast been gathering popularity with their podcast Have A Word Pod, and have now launched their bid with new single – Laura’s Gone. The song takes its title from a running gag on the show, in which Rowe, Nightingale and a pantheon of comedian guests suggest how they’d react to the listeners’ relationship dilemmas.

Adele – 22-1 – After the rip-roaring success of her fourth studio album, 30, and an emotional An Audience With, powerhouse songstress Adele currently has three songs in the shake-up for number one spot – but will she be at the top of the good list for this year’s Christmas charts? Her comeback single Easy On Me was recently dislodged by Messrs Sheeran and John – but it could rally along with her other tracks.

The Lathums – 33-1 – Rising Indie band from Wigan, The Lathums, had chart success with the release of their debut album How Beautiful Life Can Be earlier this year. As their credentials continue to rise and more gigs are booked, can the four-piece band keep up the momentum and get their anti-festive tune Krampus to the top of the tree?

Mariah Carey – 33-1 – A perennial presence in the Christmas chart shake-up, who finally reached number one for the first time last year. However, her brief stay at the top of the tree was ended by LadBaby. The Christmas Queen is pretty much guaranteed a top five spot.

Wham! – 33-1 – Wham!’s Last Christmas, widely regarded as one of the greatest Christmas songs of all time, reached number one in the singles’ charts for the very first time last year, 36 years after it was held off the top spot in 1984 by Band Aid’s charity single Do They Know It’s Christmas? Could it finally graduate from Bridesmaid to Bride?

George Ezra – 50-1 – The Amazon Music commission track titled, Come On Home For Christmas, will be there or thereabouts. Ezra has recorded a new version of Charles Brown’s Come On Home For Christmas, which has this week vaulted 10 places to number one in the UK trending charts. The momentum could continue if it cracks the top 10 in the UK singles’ chart at the end of the week.

Best Of The Rest – St Martin’s Voices has announced its first foray into the music charts, and its first ever Christmas single, with the Rebecca Dale composed version of the carol, In The Bleak Midwinter, a 66-1 shot, alongside comeback supergroup ABBA with their single Little Things, also 66-1.

Then there is the first ever Children In Need Christmas single, courtesy of presenter Andy Day, and his band the Odd Socks, at 200-1, Gypsy Pistoleros’ cover of Livin’ La Vida Loca at 100-1, while Gary Barlow leans on Sheridan Smith in his bid to banish nineties nightmares of Mr Blobby pipping Take That to number one, with How Christmas Is Supposed To Be, also 100-1.