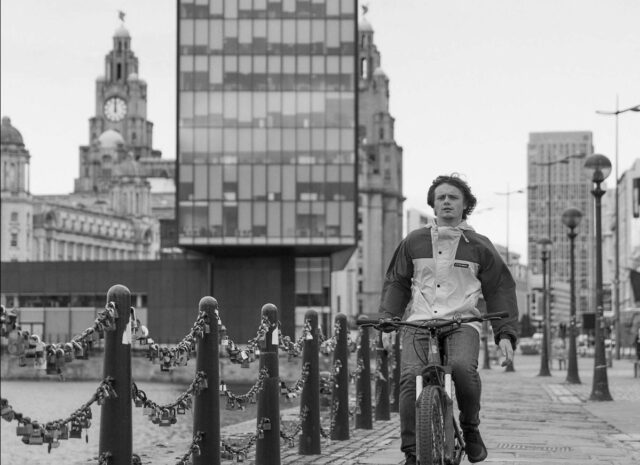 North End Kid follows recent single, Davey Kane and its ambitious video starring BBC One’s Time star, Jack McMullen, in supplying razor-sharp commentary set to layers of rich, full band instrumentation. After seeing his 2020 debut album, We Get By, stride into the top reaches of the charts, his follow-up, Moments shapes up to be an even more confident document of our times. By creating pin-sharp pictures of people he sees around him striving, and failing through no fault of their own, to make better lives, Webster is unambiguous in his motivations and inspirations.

Like the work of acerbic songbirds from the banks of the Mersey that have come before him, from Lee Mavers to Mick Head, North End Kid goes upbeat to make heroes of the downcast. This time it’s the tale of Tommy who dreams of Broadway from the fringes of a council estate, only to find real life and its hardships waiting for him when the sun rises, inspired in part by Billy Elliot and the conversational, smoky bar room swing of Billy Joel’s Piano Man.

Webster says: “Tommy is the North End Kid whose only means of escape is going and getting high in his bedroom and dreaming of being the person he wishes he could be, the person that he feels inside. But he doesn’t ever get past square one and the constant knock backs cause anger, which only lead him into finding trouble. My message is to call on people not end up like Tommy, to try for your dreams and ignore anyone’s opinions that get in the way of your own happiness.”

Webster goes into the end of the year looking ahead to a long-awaited, rescheduled and upgraded UK & Ireland Tour on top of his biggest show announcement to date, looking further ahead to a vast 11,000 capacity show at the M&S Bank Arena, Liverpool on Sat 19 November 2022. He also adds a brief run of seven, very special and intimate album launch shows, including an evening at the Cavern, to next year’s touring plans.