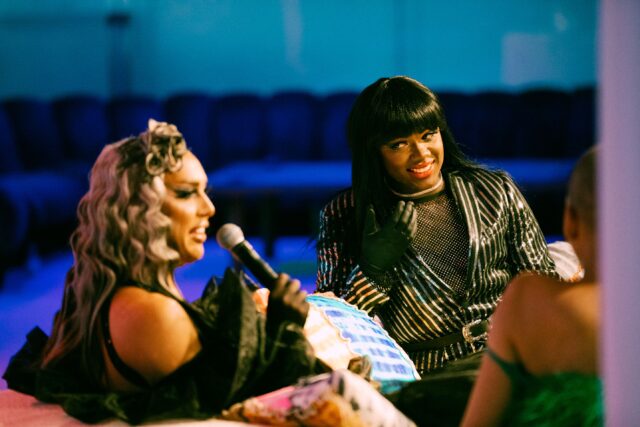 Aimed at 16-25 year olds, Dazed Live was two days of making and showcasing music, art, fashion, activism and more, at its HQ at 180 The Strand in London last weekend (Saturday 9th and Sunday 10th October).

The weekend was filled with over 50 creative workshops, performances, exhibitions and talks to inspire and empower the next generation of creatives; including a ‘getting into drag talk’ with Ru Paul’s Drag Race UK stars Vanity Milan and A’Whora, a song writing session with alternative rock band Wolf Alice, a cooking class with hip hop musician and founder of an ADHD cooking school Loyle Carner, and a performance from Coventry rapper Pa Salieu.

Dazed Live was in aid of the leading youth homelessness charity Centrepoint and fell on the weekend of World Homelessness Day. Former homeless young person Brookemorgan founder of company She Oath that aims to develop authentic confidence in young women, joined a panel to discuss hidden homelessness and address some of the causes and myths of homelessness.

“Our panel discussion went really well and it was amazing to speak alongside the other panellists as we’d all had experiences of homelessness at different ages and points in time.

“It was well received by the audience and afterwards members of the audience contacted me on social media thanking me for sharing my story as some of them had had similar experiences, but hadn’t heard anyone talking about them before. It was lovely to hear I could use my story to help others.”

Dazed also extended the invite to 30 young people who have received support from Centrepoint. Muniira, former resident at Centrepoint, explains how the day went for her:

“‘The festival was a beautiful melting pot of all walks of life’s. I learnt some of the theory behind what it take to tell a story through images, and it was organised really well”.