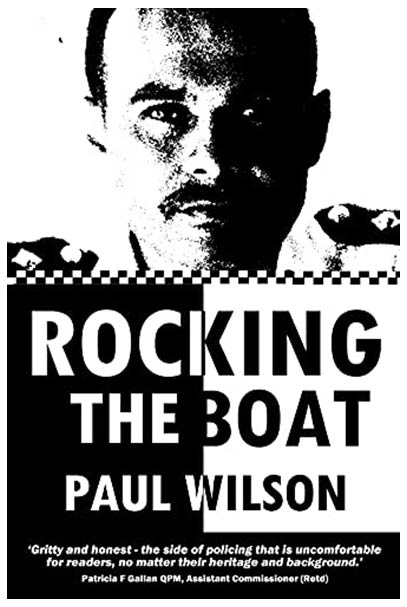 A book that needed to be written; former Metropolitan Police (Met) Superintendent Paul Wilson’s ‘Rocking the Boat’ is not only published in the midst of Black Lives Matter, but just two months after the government’s Home Affairs Committee report identified that “Twenty-two years on from the publication of the Macpherson report that followed the Inquiry into the racist murder of Stephen Lawrence, the Committee has found that whilst policing has changed for the better in many areas, there are still serious and deep rooted racial disparities, and that neither police forces nor governments have taken race equality seriously enough for too long.”

Gritty and with no holds barred the author shares his first-hand experience of institutional racism and shines a light on the breadth of racism within the Met, as well as his endeavours to hold senior police managers to account for a police culture steeped in racism. It is also the first book to chronicle the birth and development of the UK’s first Black Police Association.

Bringing to mind a host of adjectives – compelling, controversial, shocking, entertaining – Rocking the Boat is a must-read for all those interested the history of policing, black politics, equality, diversity and social justice.

A tour de force, Paul Wilson’s courageous memoir has secured his place as the narrator of some of the Met’s darkest moments.

Rocking the Boat chronicles the career of a black police officer’s extraordinary and unprecedented determination in challenging a police occupational culture steeped in racism.

In the year 2020, considerable attention was being paid to the issue of institutional racism in US law enforcement. However, this is not the first time, or the only country, in which this same issue has become relevant and pressing. As a black police officer in the UK between 1983 and 2010, Paul Wilson was in the centre of a similar wave of interest and was personally involved in many of the institutional changes that were suggested, debated, opposed, and fought in the UK during this time.

The author’s authority on the subject of institutional racism in British policing has been acknowledged over and over, as can be seen by his involvement as a consultant in numerous news and current affairs programmes; the many interviews with him that have appeared in the British media; his invitations to speak at events in France, Canada, South Africa, the UK and the US; and his status as the first British black person ever to be awarded a Fulbright Police Fellowship Award.

Though it addresses painful topics, this book is entertaining in addition to being educational. The author’s experiences as a constable on the streets of Croydon, his meeting of US President George W. Bush and his being rescued by a renowned jazz musician when he’s accidentally locked inside an apartment in Harlem, New York, are some of the events that provide humorous counterpoints to the heavy main story. More than a simple history lesson, these anecdotes turn the book into a pleasurable read.