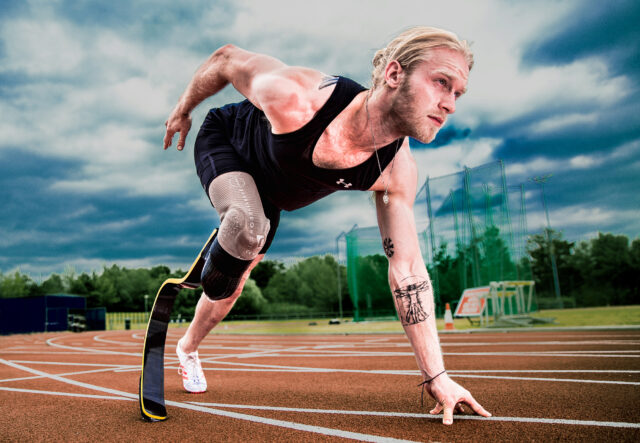 Inspiring sprint runner and MBE Jonnie Peacock is sprinting into action to applaud the nation’s Apprentices and Trainees, and their hard work throughout 2021. With a desire to see individuals succeed especially those who are considered disadvantaged, Jonnie has joined forces with one of the UK’s top recruitment and training solutions providers, Qube Learning, to celebrate individuals actively changing their lives.

As a child, living with his parents and sister just outside of Cambridgeshire, Jonnie was full of energy and curiosity, and had dreamt of being a footballer but he faced an obstacle that would change the course of his life forever. In 1985, at the young age of five years old Jonnie contracted meningitis which saw him lose a leg, an unforgettable experience for him and his family, but early on he was determined his future would not be defined by the emotional event.

At school Jonnie threw himself into everything, playing all sports and not holding back, it was only at secondary school that other children noticed he was different. Wanting to be a mechanic, Jonnie loved cars and still does, he says ‘It’s not always about the traditional exams and accreditations that will get you where you want to go. Just enjoy what makes you get out of bed in the morning, keep positive and don’t let anything hold you back’. Jonnie’s mum and dad were big influences on him and embedded determination into him early.

In the hospital that fitted his prosthetic leg Jonnie was informed about disability sport and was directed to a Paralympic sports talent day, and it is there that Jonnie found solace and a deep-rooted drive that took over him. After encountering life changing challenges, he was inspired to prove that no one should be discriminated against for a disability and in 2012 Jonnie stood proud as he was adorned with a gold medal, crowned a Paralympian at only nineteen years old.

Jonnie Peacock says, ‘I have built a solid foundation of resilience over the years, and I believe this is what has kept me going. When I was still at studying, I struggled to walk when my stump was sore so my mum would help carry me to school, I didn’t want to give in. Finding my inner voice that was telling me ‘I can do it’ allowed me to put the effort and time into getting to where I am now. It wasn’t an easy route, but it was the right one. Not a day goes by when I don’t look around and see where my determination has got me, I feel lucky but then remind myself it’s not luck it was me who conditioned my mindset to believe in my abilities. I was the child whose life could have taken a very different path, but I decided I am worthy and will make something of myself and that’s what I did. How we perceive achievement is slowly changing. It isn’t about who you know, how much money you have, where you live or who your parents are – the world now has the chance to change this attitude and I believe in many areas of life this is happening. To look at unlocking true potential, like Qube Learning, will engage unseen demographics who deserve to be seen whether it be at work, studying, with friends or family, they have the right to thrive just as much as anyone else’

One of the biggest obstacles Jonnie faced was representation, seeing disability athletes in adverts and on TV is the biggest step towards inclusivity. When he was younger, he did not see an athlete or role model with one leg or in a wheelchair and now you do.

Jonnie’s work with Qube Learning, an organisation that wholly champions Apprenticeships and Traineeships and encourages success for anyone no matter where you are from, will see him reward the organisation’s incredible students and the employers who take them in front of many UK business names on the 14th October 2021 in a virtual award ceremony – https://www.qube-learning.co.uk/event/qube-awards-2021/

Qube Learning is proud to be an OFSTED grade 2 (Good) Recruitment and Training Solutions Provider that works with hundreds of Employers across the country to deliver a range of training and qualifications to a multitude of Students. If you are interested in finding out more about the positive opportunities an Apprenticeship or Traineeship can bring through Qube Vision and eLearning, either as a Student or an Employer, then speak with the experts at Qube Learning.