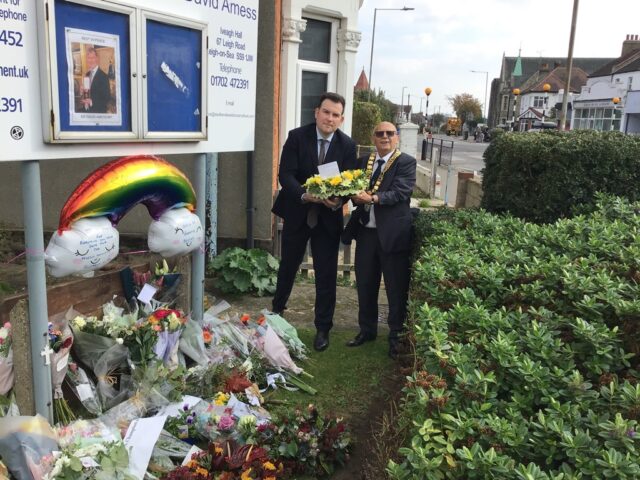 On behalf of the Council, Councillor Clive Souter and Councillor Joel Charles laid a wreath alongside flower tributes, which have been left outside Sir David’s constituency office on Leigh Road in Leigh-on-Sea.

They then left a message in a book of condolence that has been opened for members of the public to pay tribute after the tragic loss of Sir David last week.

The message on the wreath and in the book reads: “Thank you, Sir David, for championing Essex in Parliament. You will always be remembered as a kind and committed public servant. Harlow Council offers its support to Southend residents and stands united with all Essex councils in defending the principles of democracy that you embodied throughout your parliamentary career. Your legacy is secured with the city status announcement.”

Councillor Clive Souter, Chair of Harlow Council, said: “Given the outpouring of public grief since last Friday and the impact that this terrible incident has had on all politicians, it was appropriate and fitting to visit Leigh-on-Sea to pay the council and town’s respects to Sir David. It was also an opportunity to offer support to the residents of Southend and to Sir David’s colleagues and friends, who are still in shock, to say that we stand united with them.”

Councillor Joel Charles, Deputy Leader of Harlow Council, said: “It was moving to visit where Sir David tragically passed away from his injuries and take some time to read the many tributes, including those left by the Prime Minister, Leader of the Opposition and many members of the local community. It is clear that Sir David’s community has been devastated by what has happened. The attack was not just on Sir David, but on the very fabric that binds our democracy together and the openness upon which politics is conducted at a local level. The local response shows that Essex stands together in rejecting such an act of violence against a public servant.

“It was a fitting tribute that Her Majesty The Queen granted Southend city status in memory of Sir David’s tireless commitment to the seafront community.”

The flags remain at half-mast outside the Harlow Civic Centre as a mark of respect. Harlow councillors will be holding a minute’s silence in Sir David’s memory at the next Full Council meeting on 28 October 2021.

More information about tributes and books of condolences for Sir David can be found on Southend Borough Council’s website: https://www.southend.gov.uk/