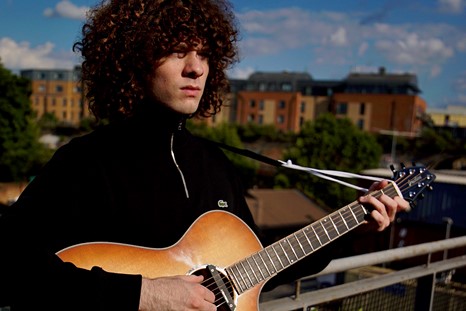 Dylan John Thomas is excited to share details of four new live shows for later this year, and the video for his new single, Feel The Fire.

The fast-rising young Scot will play London’s Oslo venue on 30th November and Manchester’s Night & Day on 2nd December ahead of shows in Dublin and Belfast. The new dates follow Dylan’s previously announced live shows in Dundee, Aberdeen, and an already sold-out Glasgow show at St Luke’s in November.

Tickets for the dates go on sale from Wednesday 6th October.

Dylan John Thomas recently shared the second single to be lifted from his forthcoming self-titled EP. A video for Feel The Fire is online now, ahead of the EP’s release on 29th October. The track was produced with Rich Turvey (Blossoms, Courteeners).

Dylan hails from the east end of Glasgow, and is already breaking records in the motherland. He sold out the legendary King Tuts quicker than any other debuting Scot, and clocked over a million streams of his earliest introductory material. Mentored by Gerry Cinnamon who took Dylan touring to sold-out arenas across this fair isle and into Europe, and hand-picked by Liam Gallagher to support him at the aircraft-hanger sized Hydro Arena, these are all telling rites of passage and moments on a timeline that should find Dylan John Thomas as the next big talent to break out.

As an all-too-rare working-class musician, Dylan endured a tumultuous upbringing in foster care, where he was given very little encouragement to pick up a guitar, but he didn’t need it. His is a talent nurtured through despondency and resilience; a story being written, and now ready to be told.

This Summer, Dylan enjoyed arguably his biggest hometown moment with a high-profile slot on the infamous King Tut’s Stage at Scotland’s biggest music festival, TRNSMT, drawing one of the biggest crowds of the weekend. He performed to similarly rapturous crowds at the Neighbourhood Weekender, Newcastle’s This Is Tomorrow Festival, and the Isle of Wight Festival last month.