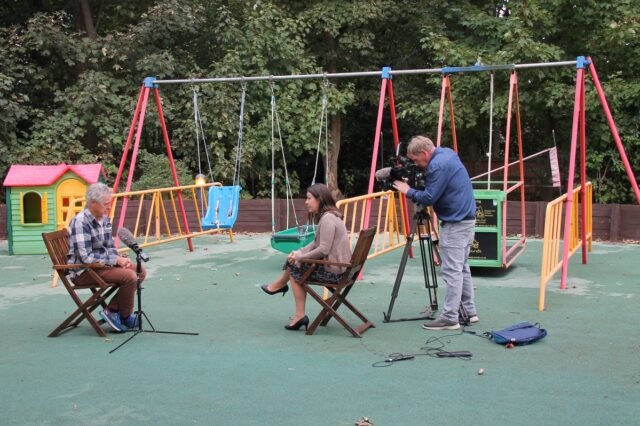 The star-studded extravaganza has been organised with the help and support of Griff Rhys Jones and will take place at Ipswich’s Regent Theatre on 6th December 2021, to raise funds for East Anglia’s Children’s Hospices (EACH).

It follows the success of the December 2019 show and this year’s feast of festive frolics, sponsored by Birketts, will feature a list of well-known names, also including Clive Anderson, Irish comic Ed Byrne and West End star Ruthie Henshall.

Others on the bill include Britain’s Got Talent magician Magical Bones, Daniel Sloss, Kai Humphries, the Nimmo Twins and Westdal and Hayward (see below for full list of confirmed acts).

Tickets, starting from £40 (including a booking fee), are selling fast but still available via www.ipswichtheatres.co.uk and www.each.org.uk/griff.

Happy Christmas Ipswich 2 promises to be another fun-packed night of laughs, music and entertainment and will hopefully be another major success, with the 2019 event raising more than £70,000 for EACH.

Kevin Clements, EACH Director of Fundraising, said: “We’re very much looking forward to our big night in Ipswich.

“The event in 2019 was great fun, hugely popular and, most importantly, raised tens of thousands of pounds for EACH.

“Hopefully this year’s show will be bigger and better and raise even more money.

“Griff has put together a very impressive, high-profile list of celebrity acts and it should be a very special evening.

“Tickets are selling fast and my advice would be to get in fast because it’s going to be an unmissable night!”

Griff is an active supporter of the charity and has kindly dipped into his book of celebrity contacts to make this year’s event possible.

He has previously visited The Treehouse in Ipswich, met with families on various occasions and raised thousands of pounds for EACH.

The closure of theatres during the pandemic did not stop his fundraising efforts as he raised an eye-watering £146,466 with an inventive online Celebrity Bottom Drawer auction.

Speaking in a personal video announcement, Griff said: “I hope it will make a major contribution to helping EACH during what has been, during lockdown, a very difficult time. We can get together, we can have fun, we can have music, we can have dancing and we can have comedy – and we can have Happy Christmas Ipswich… 2!”

Griff visited The Treehouse on Tuesday to face the media and officially launch Happy Christmas Ipswich 2.

He also met eight-year-old Erin Sadler, who lives with mum Helen and grandad Philip in Colchester.

Erin has a number of complex health needs meaning she requires care 24 hours a day, seven days a week. Erin and Helen are supported by EACH.

Helen also spoke to the media and said: “Happy Christmas Ipswich sounds like a very special event and, from my point of view, I’ll always do anything I can to promote EACH fundraisers.

“It’s important to me and my way of repaying the people who have helped and supported Erin.

“The Treehouse has become such an important place to us both and I love it when people like the media take an interest in her story.

“She’s a very brave, inspirational little girl and I want as many people as possible to see her beautiful, smiling face.

“Erin’s been through so much but still has a real zest for life. This is a place where she has moments of real joy and feels happy, safe and secure.

“From my point of view, as a parent, that means so much.”