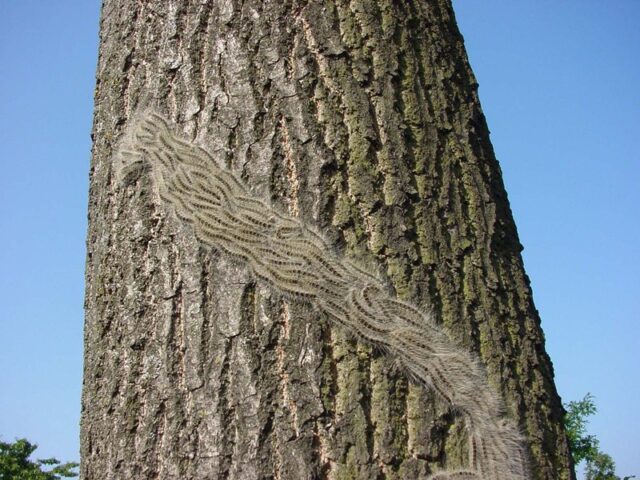 Harlow’s parks and open spaces are a haven for residents, but Harlow Council is urging residents to be vigilant against a pest found in Oak trees.

The first sightings of the Oak processionary moth (OPM) have been confirmed on public land in the Sumners area in Harlow in two separate locations – Milwards and The Dunstalls.

The council’s parks team is working to control the spread of this pest and has put up safety notices in those areas affected to warn the public. Trees have also been cordoned off and the council has contacted residents who might be affected directly. Specialist pest control works will take place to remove the nests.

Residents are advised to avoid all contact with the caterpillar and their nest as it can cause itchy rashes, eye irritations and, in severe cases, breathing difficulties in people and pets.

Councillor Alastair Gunn, portfolio holder for environment, said: “Where the caterpillars or their nests are identified on public land, the council follows Forestry Commission guidance to deal with the infestation. Meanwhile, we continue to urge residents not to touch the caterpillars if they believe they have found a nest, and to make sure they look after their pets as they can also be affected.

“All sightings of caterpillars and nests on either public or private land need to be reported to the Forestry Commission, which has a programme in place to tackle the pest.”

Reports can be made on the Forestry Commission’s online reporting system ‘Tree Alert’ – www.forestresearch.gov.uk/tools-and-resources/tree-alert/

If the tree is in a council park this should also be reported to the council immediately on 01279 446655 or email: contact@harlow.gov.uk. Residents should not attempt to remove the nests themselves.

If the tree is privately owned, reports should be made to the Forestry Commission using the Tree Alert online pest reporting form. Reports can also be made by telephone on 030 0067 442 or by email at opm@forestry.gsi.gov.uk.