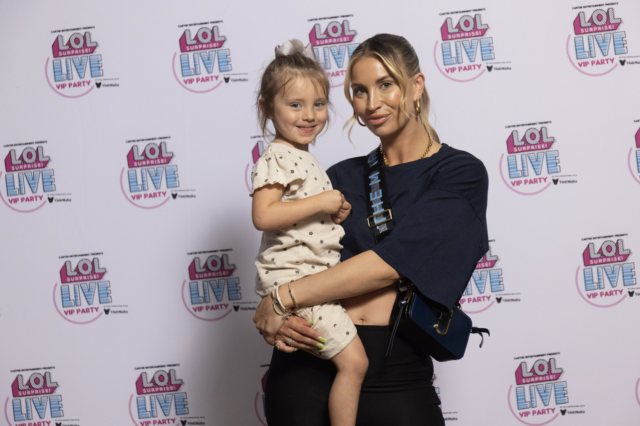 Ahead of its first ever national UK tour, Ferne McCann surprised the cast and crew of L.O.L. Surprise! LIVE VIP Party in collaboration with Visit Malta, to help the show prepare for this highly anticipated, brand new show! Ferne was given exclusive behind-the-scenes access at the dress rehearsal, learning a step or two from the show’s dazzling dance routines along the way.

Ahead of the L.O.L. Surprise! LIVE UK tour premiering on 19th November, Ferne and her daughter, Sunday, joined the cast portraying the role of their favourite L.O.L. Surprise! characters at Westfield’s KidZania, getting a sneak peek at what’s in store for the show. Side-by-side with everyone’s favourite B.B.s, Ferne and Sunday had a day of glitz, glamour and fashion, encouraging local families to get their dancing shoes on and get prepped for the hottest show in town.

With the fiercest dance crew by her side, Ferne and Sunday took to the stage, performing a few dance steps to L.O.L. Surprise! LIVE’s brand new song, Get Up and Dance.

Ferne McCann, TV personality and presenter, said: “Sunday loves L.O.L. Surprise! and ever since she heard about the tour, she hasn’t stopped asking when we can go to the live arena tour. I used to love going to concerts when I was younger so taking Sunday to her first one is going to be a really special moment for both of us.

With fierce dance moves and all the glitz and glam you’d want from a L.O.L. Surprise! LIVE show, I know it’s going to be an unforgettable evening!”

Produced by Carter Entertainment, the L.O.L. Surprise! LIVE VIP Party will be appearing in the UK from November 2021 until early 2022. For more information on the tour, or to purchase tickets, head to www.LOLSurpriseLIVEonTour.com