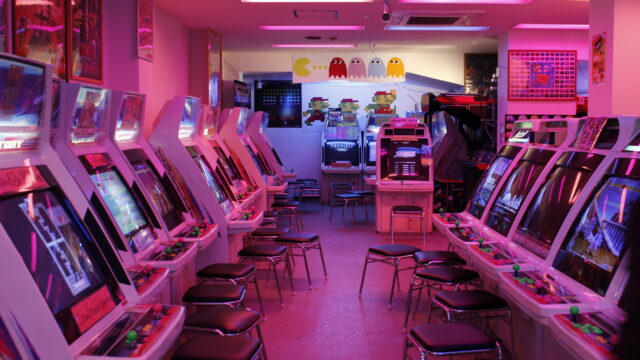 Although arcades may no longer be as popular as they once were, classic arcade games are enjoying a new life on mobile devices. In the United Kingdom, 87% of adults own a smartphone, and 41% of them spend their time playing games, reports Cybercrew. This, plus a recent resurgence in retro nostalgia, has encouraged game developers to create more mobile-friendly versions of beloved arcade titles. If you’re looking for a fun way to enjoy a blast from your gaming past—or if you’re a younger gamer hoping to see what all the hype over classic games is about—here are some options you can now play on your smartphone:

Though its objective and controls are fairly basic (just keep shooting continuous waves of alien forces), 70s gamers couldn’t get enough of Space Invaders. A popular myth is that during its initial launch, Japan had a shortage of coins since everyone was spending it on Space Invaders. In Britain, the classic shoot-em game managed to get even Parliament talking. Labour MP George Foulkes proposed a regulatory licensing scheme to curb the “deviancy” brought about by the game. Thankfully, other MPs vetoed the bill and generations of gamers have been able to freely enjoy Space Invaders. Over 40 years after its initial release, Space Invaders continues to be just as popular as ever. Its modern mobile iteration still retains its original interface, and even has a joystick and button control on the screen.

Inarguably, Tetris is one of the most famous games of all time. Originally created in 1984 by Alexey Pajitnov, it was a fun way to test a new type of computer (the Elecktronika 60) developed by the Soviets. Eventually, Tetris was marketed as a mainstream game that exploded globally. In the UK, there is even the Classic Tetris Championship which attracts players from all around Europe. Today, it has been reinvented in a variety of ways. These include a slot iteration, which according to Foxy Games has the same famous graphics while also including new mechanics for cash payouts. Other recent forms are Tetris Battle 2P on Facebook and Electronic Arts’ smartphone-optimised version. Some mobile versions up the ante with thrilling multi-player options.

Sonic, the speedy bright blue anthropomorphic hedgehog is one of the most recognisable characters worldwide. The first Sonic to pop up in arcades was the SegaSonic the Hedgehog cabinet in 1993 and was met with much fanfare. The massive impact that Sonic has had, has even birthed a 2020 feature film that topped the UK box office. For mobile phone gamers, you can enjoy the adventures of Sonic and friends through either the SEGA Forever collection or the Sonic the Hedgehog Classic versions. Though they retain the charm of the original 90s versions, the games have been remastered to work with modern tablets and smartphones. Most smartphones are packed with user-friendly features, but if you want to enjoy hassle-free gaming with Sonic, it’s advised that you enable an ad-blocker for the gameplay.

One of the most popular racing games published by Sega, Crazy Taxi made its first arcade appearance in 1999. Known for its bright colours, wild fashion, and great soundtrack — Offspring and Bad Religion to name a few — Crazy Taxi uses maps from San Francisco, New York, and Las Vegas. Since then, it has been re-released for console-gaming, where it became one of the best-selling Dreamcast games. In the UK, arcade centres in Leeds and Bury still have the classic arcade cabinets for nostalgic gamers. Currently, there are three mobile versions of Crazy Taxi: Crazy Taxi Classic, Crazy Taxi City Rush, and Crazy Taxi Tycoon.

Although smartphones are always adapting for the future, with these mobile-optimised retro games, your device can now also take you back down memory lane.