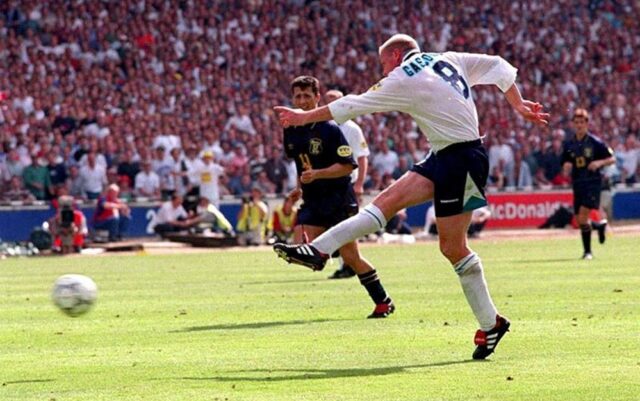 Paul Gascoigne’s sublime goal and famous dentist chair celebration against Scotland in Euro 1996 has been ranked the greatest Euros football moment ever according to new research revealed today.

Ahead of the big kick off in Rome on June 11, Samsung KX asked 2,000 football fans to name the most memorable moments in the tournament’s history. Gazza’s unforgettable Wembley celebration during England’s 2-0 win against Scotland took a whopping 42% of the vote to secure first place.

The study was commissioned ahead of the launch of Samsung KX’s new Neo QLED VAR Challenge – a new experience that gives visitors the opportunity to step into the shoes of a referee and review a series of controversial VAR decisions in ultra 8K detail. The experience launches in Coal Drops Yard on Wednesday 9th June and runs until Sunday 20th June.
The top voted moments saw current England manager Gareth Southgate’s infamous penalty shoot-out miss that saw his side knocked out of the tournament come in second with 32%. Southgate missed the crucial sixth penalty when England’s semi-final against Germany finished 1-1 and the shoot-out went all the way to sudden death.

The former defender has revealed he could not listen to Three Lions (Football’s Coming Home), recorded by David Baddiel, Frank Skinner and the Lightning Seeds, for 20 years.

In third spot with 28% of the vote was England’s epic 4-1 thrashing of Holland to qualify for the quarterfinals of Euro 96. Football came home in stunning style with the SAS – (Alan) Shearer and (Teddy) Sheringham – each scoring twice as Terry Venables’ team delivered a masterclass.