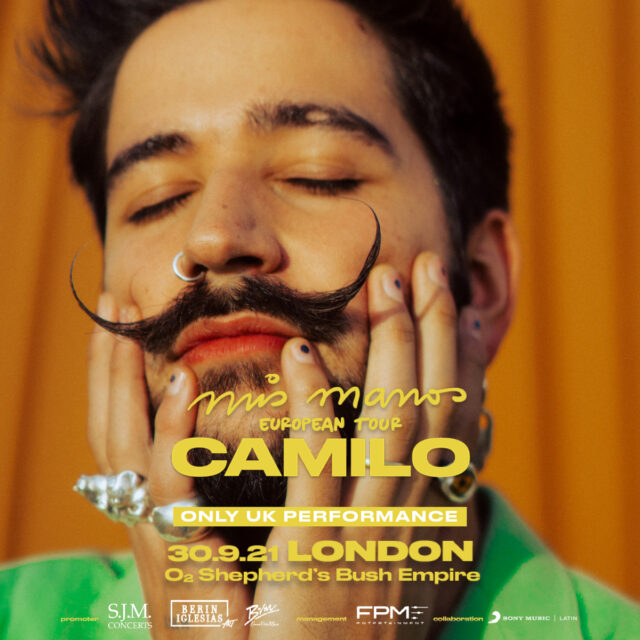 Equipped with an effortless combination of impeccable songwriting and an intuitive sensibility for pop music, Camilo became a 2021 Grammy Nominee, Latin Grammy winner and 7x Latin Grammy nominee who has amassed over 10 billion worldwide streams across all platforms.

Camilo first made his mark lending his writing talents to luminaries of Latin music today like Becky G, Bad Bunny, and Karol G. Named by Billboard as one of the “15 Latin Artists to Watch in 2020,” and hailed by PAPER as one of the “12 Latinx Artists to Stream Right Now,” his first album Por Primera Vez hit #1 on Billboard’s Latin Pop Album Chart and was certified platinum in 4 different countries, including the US. Por Primera Vez features the hit single “TUTU” ft. Pedro Capó, which was RIAA certified 10x platinum and has accrued over 1.4 billion worldwide streams across all platforms. The nominated album also includes the international hit “FAVORITO” which reached the # 29 position on Spotify’s Top 200 Global, registered 935 million streams, and more than 365 million views on YouTube.

In 2020, Camilo managed to have three videos on Vevo’s Top 10 Most Watched Videos Worldwide” with his videos for “Favorito”, “Vida de Rico” and “Por Primera Vez”, which together registered more than a billion views on YouTube. He continues to grow his followership on social media with more than 21.9 million followers on TikTok, 19.9 million followers on Instagram, and 12 million subscribers on his YouTube channel.

Camilo has recently released his second studio album Miso Mano, the record features 11 tracks including the previously-released singles “Vida de Rico,” “Bebé” with El Alfa, and “Ropa Cara”. The album was born during the global pandemic, while in lockdown with his wife, actress-singer Evaluna Montaner.

Already receiving huge international success, Camilo is excited to be heading out on his first-ever tour and will perform a very special UK show at London O2 Shepherd’s Bush Empire on Thursday 30th September 2021. Tickets go on general sale at 9:00am Friday 28th May and will be available from www.gigsandtours.com