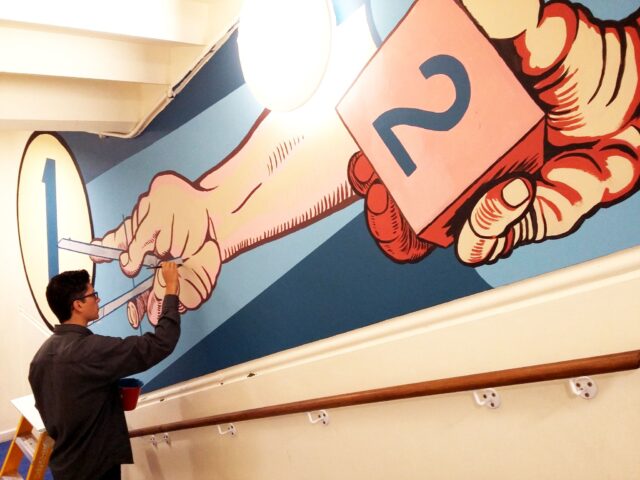 Local arts organisation Art Eat Events are currently working with artists Edward Ofosu and Raul G. Loya and residents at HMP Hollesley Bay prison on the final stages of design for a new mural which will be painted up on the Ipswich Waterfront at the end of May. The new mural will celebrate the much anticipated and inspiring Power of Stories exhibition opening soon at Christchurch Mansion.

The 8th mural project organised by Art Eat Events has been a Covid-safe art activity for residents of the prison. Workshops were led online by the artists from Ghana and Mexico and educational sessions about objects in the exhibition were delivered by Eleanor Root from Colchester + Ipswich Museum Service. The workshops were based on creative workbooks designed by Edward Ofusu and the art materials generously donated by the Ipswich Museum.

The opportunity for prison residents in Suffolk to work with international artists and deliver public artwork in Ipswich for local people to enjoy, is one sure way to put Ipswich on the map as a progressive and dynamic town. Encouraged by the growing cultural landscape of the town Art Eat continue to deliver meaningful and engaged projects that express solidarity and reflect an inclusive culture through their working practices.

“Arts and creativity in criminal justice settings can support improved wellbeing, awaken an interest in learning and can help people build new positive identities. Engaging in the arts can also lead to new skills and employment opportunities, as well as equipping participants with a desire to actively engage in their community and culture.” – National Criminal Justice Arts Alliance

Edward Ofuso is a self-taught Ghanaian artist based between Ghana and London since 2004. His award winning work has been widely exhibited in shows such as The Royal Society of Portrait Painters and he completed a scholarship at the Hampstead School of Art in 2014. Edward has taught workshops at the Apple Store, the V&A museum and the Queen’s Gallery, Buckingham Palace and participated in the Sky Arts Portrait Artist of the Year 2014 and 2017 TV programs. He is currently working on a personal project of 100 African leaders portraits for a permanent collection in Ghana. Edward’s work is held in private collections around the world.

Upon reflection of his work with this project he notes “what binds us together is far greater than what separates us.” Edward Ofosu

Raul G Loya is an artist who specialises in mural painting, illustration and printmaking. He was born in Mexico City and since 2008 has been based in Manchester. Raul’s style is predominantly inspired and influenced by the Mexican muralist movement, Posada’s skeletons and Rock & Roll album covers. In 2013, Raul founded La Chuleta Press, an independent illustration and printmaking project. Some of Raul’s clients include: The V&A Museum, London (UK); Manchester City Council; 20th Century Fox (USA); Walt Disney Productions (USA) and his work is held by various private collectors. Raul has exhibited in the United Kingdom, Spain, USA and Mexico.

“Working on this project has made me reinforce my belief in art as a powerful tool for human transformation. Through the participation in the workshops the residents responded to the ideas encouraging a reflection on narratives and the different ways that a message can be delivered, and how this is always influenced by the point of view of the storyteller and their personal beliefs. Together we felt the power of drawing as a means of communication and freedom.” Raul G. Loya

Art Eat Events is grateful to Ipswich and Suffolk Council for Racial Equality for introducing them to HMP Hollesley Bay Equalities Team last year and inspiring a connection that led to this project, and to Ipswich + Colchester Museum Service who have supported the project in advance of the Power of Stories Exhibition.

Hopes are that the new murals along St Peter’s Dock will draw attention to the Power of Stories exhibition and the array of exciting events organised by Aspire Black Suffolk in Ipswich and Bury St Edmunds beginning on the 19th of June 2021.

This project has been made possible thanks to funding support from The National Lottery Fund and The Arts Council of England.