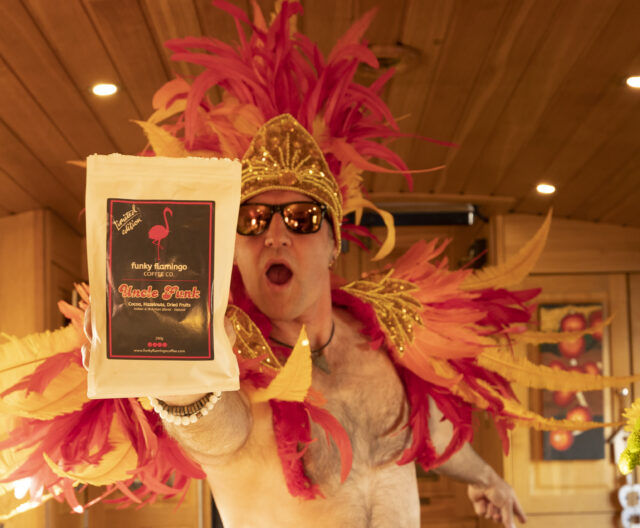 An artisan coffee company, known for it’s funky range of coffee flavours, have named one of their coffee beans after the Herts/Essex based disco band Uncle Funk’s Disco Inferno!

Funky Flamingo Coffee got in touch with front-man Uncle Funk to ask whether he would promote their range of coffees, which are named after famous disco songs and iconography.

They were so impressed with the resulting posts on social media that they decided to call their next coffee flavour “Uncle Funk” in his honour!

Uncle Funk said “I’m very flattered to be part of Funky Flamingo’s range! Their coffee is excellent, and they’ve picked some great titles to go with their brand!”

“Our flavour is a dark Indian and Brazilian blend, which rather suits our new band! I love it!”

Uncle Funk’s Disco Inferno start their busy summer with festival shows all over the country including the three Rewind Festivals in Henley, Macclesfield and Perth in Scotland, and will once again be headlining the opening night of the Standon Calling Festival in Hertfordshire on Thursday 22nd July.