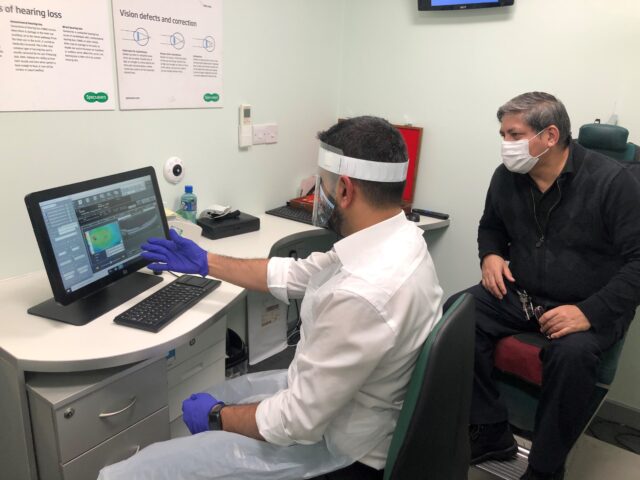 EXPERTS are urging people to make their eye health a priority so they don’t succumb to one of the leading causes of blindness in the world – glaucoma.

Often called the ‘silent thief of sight’ due to its gradual onset, more than 700,000 people in the UK are estimated to have the condition – and this is predicted to increase by 44% by 2035 . Yet, because it’s often symptomless 50% of glaucoma cases go undetected . Many don’t realise they have the condition before it is too late which is why regular eye tests are so important.

Based on its customer data, Specsavers predicts that around 6 million people in the UK have missed out on their eye test due to the pandemic – including more than half of its customers (55%) . This means that signs of glaucoma aren’t being picked up.

That is why this World Glaucoma Week (March 7-13) the high street optician is urging people to stay on top of these vital checks.

Giles Edmonds, Specsavers clinical services director, says: ‘What is concerning for us as optometrists is that many people have missed their eye test due to the pandemic. At Specsavers we identified 66% fewer cases of glaucoma in 2020 than we did in 2019. When you consider that we perform almost half of all eye tests across the UK, this gives a good indication into how much glaucoma referrals will have dropped as a whole, which is an extremely worrying statistic.’

He adds: ‘Glaucoma is one of the leading causes of blindness in the world, but what makes it even more concerning is that it is often symptomless. While it cannot be reversed it can be successfully managed. This is why having an eye examination is so important as it can often detect any subtle changes before it is too late.’

The most common type of glaucoma, primary open-angle glaucoma, is hereditary. If members of your immediate family have glaucoma, you are at a much higher risk than the rest of the population – in fact family history increases risk of glaucoma four to nine times . There are also several other risk factors it is important to be aware of too.

Karen Osborn, Chief Executive at Glaucoma UK, says: ‘There are several factors which could make you more at risk of developing glaucoma, such as family history of the disease. People of African-Caribbean or Asian origin, or who have higher levels of short sightedness, are also more at risk. Your age can play a big part as well. Two in every 100 people over 40 have the disease, and 10% of people over 75 are also affected . Glaucoma is often symptomless, so if people are not having routine eye tests, they may have the disease and not even know it.’

Almost all Specsavers stores are fitted with OCT (optical coherence tomography) machines which allows optometrists to detect glaucoma up to four years earlier than traditional techniques.