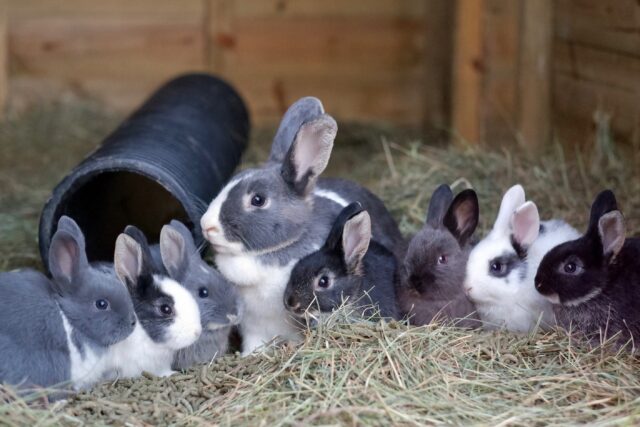 Every year hundreds of rabbits are bought as Easter gifts.

Rabbit Residence Rescue, based near Royston, is pleading with families not to buy rabbits as gifts over Easter.

The rescue looks after up to 100 rabbits at any one time, many are handed over after families can no longer offer them the care they need. They may be cute, but they can be surprisingly hard work and expensive to keep properly.

“Since the first lockdown we have taken in 157 rabbits and just since January 2021 we have already taken in 37, from accidental litters and young unneutered pairs fighting, to underestimating how destructive they can be and how much space they really need.”

The rescue recently took in a gorgeous young Rex rabbit boy called Hero. At only five months old, he was the result of an accidental litter due to a breeder miss-sexing a pair. He had been kept with his brother who had badly injured him and needed emergency surgery on arrival. Now neutered, he is healing and will soon be bonded to a new rabbity friend by the rescue.

Just after Christmas the rescue were also asked to take in a beautiful young girl rabbit named Joy, only just a year old herself, she had just given birth to her third litter of babies, two of which sadly passed away before the rescue were asked for help. The rescue are now caring for Joy and her seven babies, all of which will be neutered before they are rehomed at a cost to the charity of over £1,000.

“We wish these stories were rare, but sadly it’s terribly common. Rabbits do best in pairs but both pairs must be neutered or spayed and properly bonded by someone experienced in rabbit behaviour such as a good rabbit rescue. Sadly both pet shops and some breeders will sell baby rabbits as pairs, but once they’re 4 months old their hormones kick in and they are very likely to fight and, if they’re opposite sexes, breed. Female rabbits have a gestation of just four weeks and can even get pregnant only minutes after giving birth. If you would like a pair of rabbits, a good reputable rabbit rescue will have already bonded, already neutered pairs ready for adoption, this saves a lot of heartache.”

Rabbits are often portrayed as easy pets for children, and Rabbit Residence is keen to dispel that myth. The rescue encourages potential rabbit owners to have a good look online for up-to-date rabbit care.

“We often have to break the bad news to potential owners that the hutch they’ve bought is actually entirely inadequate for the rabbits they would like to adopt. We comply with the Rabbit Welfare Association’s advice and recommend a minimum of 60 square foot as a base for your rabbits. This must be secure and safe for them to play in at all times of the day and night and means you can provide them with lots of toys such as tunnels and digging pits to play in. We also encourage potential owners to read up on the cost of rabbits, as vets bills can be astronomical and they need yearly vaccinations.

If you are thinking of bring rabbits into your family, please do your research and you can also contact the Rabbit Residence Rescue for advice via their website at http://www.rabbitresidence.org.uk.