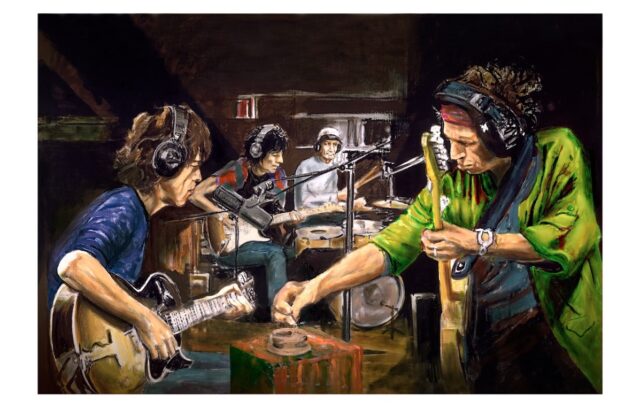 Ronnie Wood is proud to present five new signed, limited-edition prints celebrating his life and work with the Rolling Stones.

Two brand new editions from Ronnie’s sought-after Collector Series, titled Conversation and Forty Licks will be available as an edition of 295.

Conversation captures an intimate moment in the recording studio. The interplay between band members shows not only the intensity and concentration of this unique bond, but also displays a calmness. Charlie, particularly, in the background, yet central to the piece appears to be keeping the whole band in check, holding his group together.

Forty Licks is an explosion of energy and colour and a curtain call to the Stones first forty years. This vibrant image now offered by Ronnie in a new size is an absolute must for collectors of his art. These Collectors Series prints are individually named, numbered and hand-signed by Ronnie and are priced at £495.

A further three limited edition prints from Ronnie’s Group Studies will also be available for the first time. Ronnie is proud to present his latest series of work exploring his relationship with his fellow Rolling Stones. Here Ronnie captures the movement within the performance styles of Mick, Keith and himself, perfectively juxtaposing the three ‘frontmen’ to create three unique live ‘moments in time’. Striking individually or as an imposing set of images, these Group Studies are also individually named, numbered and hand-signed by Ronnie and each price at £495.