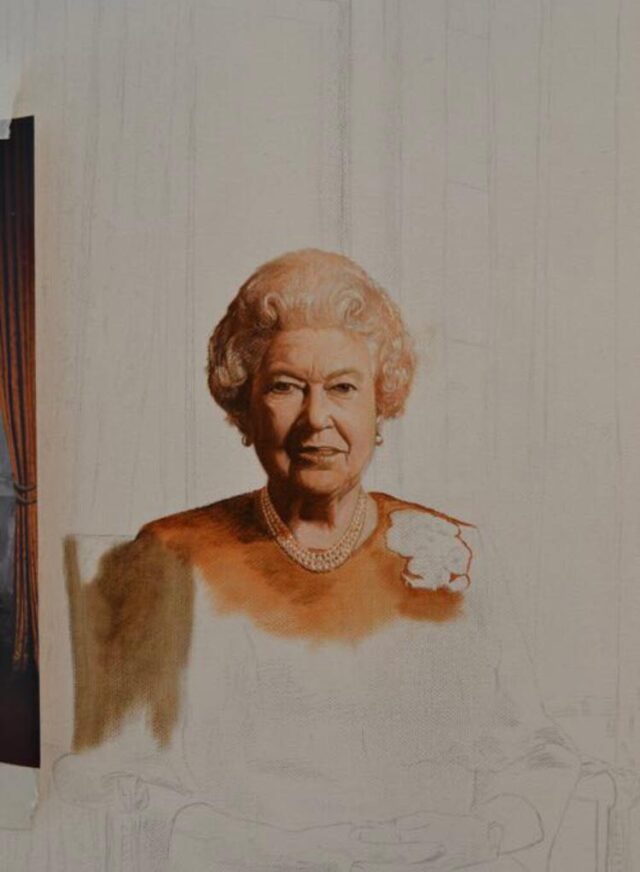 Sketches that show the intricate workings and process behind the 2011 official portrait of The Queen, will go on sale for the first time today.

The ten-year-old works of art, one in charcoal and the other in oil, were the basis for the final piece that was unveiled by Princess Anne and currently hangs in Buckingham Palace.

Baker is the youngest artist to paint The Queen. His exceptional talent was recognised and supported by the Prince’s Trust upon graduation from Art Collage. His work resides in many prestigious public and private collections, including 10 Downing Street, The House of Lords, St James’s Palace and the Bahrain Royal household. His celebrated works include portraits of Zara Tindall, Tony Blair and Pope John Paul II.

The drawings are being made available to buy via ZigZagNude, a new arts agency which specialises in offering its clients bold British contemporary art.

“Drawn from life, unlike the official portrait, the sketches are technically brilliant and intelligently capture the strong physical structure of The Queen’s face in combination with her inner serenity. Furthermore, the sketches expose the portrait making process and set-up behind the scenes of the formal sitting in 2011. They offer the chance for a private collector or public museum to own an important piece of British history.

Queen Elizabeth II has reigned longer than any other monarch in British history. To me, she is the perfect symbol of strong female leadership and equality, having passed the Crown Act of 2013 that states succession will be dissociated from the gender. I wanted to recognise The Queen as a champion for gender equality and equality of opportunities by making these art works available on International Women’s Day.”

If you’re interested in purchasing the works of art, you can register your interest via the ZigZagNude website.