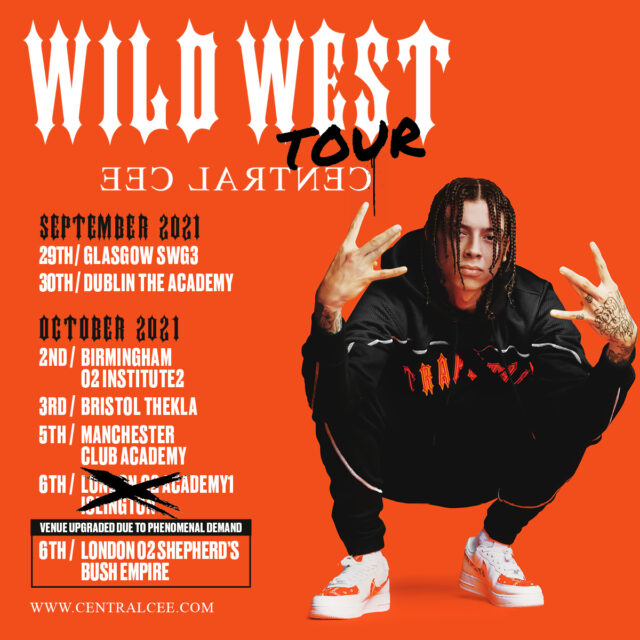 22 year old West London hailing Central Cee has dropped his debut mixtape, Wild West. The project lands in the wake of his chart scaling singles “Loading” and “Commitment Issues”, the latter of which peaked in the UK Top 20, spending two weeks and counting holding strong against some of the most established names in music – Cench’s second top 20 single.

Wild West is a true statement of intent from the young rapper – a fourteen track body of work that’s both ambitious and far reaching, a sign of what’s to come from the ever-growing talent of Central Cee. Showcasing Cench’s truly dexterous word play, the tape takes us through the defiance of “Fraud” and “Xmas Eve”, the honesty and sensibility of the observational “Ruby”, the undeniably catchy “Hate It Or Luv It” to the known bangers such as “Loading”, “Commitment Issues”, “Pinging” and the viral wonder “Day In A Life” – a track that propelled Cench into new realms of musical prowess.

After lifting the curtain early on Valentine’s day with his February single “Commitment Issues.” The single saw a new sound from the West London rapper, a softer and more melodic track that speaks on spoiling a special partner on the romantic holiday. Following up the single with a competition to win a Rolex watch, Cench then went on to drop a limited run of merch in collaboration with Trapstar – a drop which broke the website before selling out in an hour flat. A week later Cench announced a six date UK/IRE tour across Glasgow, Dublin, Birmingham, Bristol, Manchester and culminating in a headline London show, this Autumn.

Having kicked off 2021 as one of BBC1XTRA’s Hot For 2021, and with a dose of fresh music in the form of “Pinging (6 Figures)”, Central Cee has been going from strength to strength, even being named as Spotify’s RADAR artist (previously held by Beabadoobee.) The track followed on from Top 20 single “Loading”, (now certified Silver), the lyrically dexterous, jazz-infused drill beat, which has garnered over 70 million streams to date and spent 18 weeks in the UK Official Charts – still remaining in the UK Top 40 after 10weeks.

Wild West promises to not only showcase the lyrical prowess of this young rapper but also cement the inimitable, stand-out sound that Central Cee has built over the past few months.

A mysterious character, Cench has let the music do the talking so far, hitting target after target and garnering over 10 million streams per month – maintaining a truly remarkable rapid upward trajectory. In a year where the unexpected has become normal, Central Cee has been making his name heard, displaying a grime-esque flow over melodic, forward-thinking beats. His blend of concise lyricism, layered with introspective thought and social commentary, has given listeners from his area, someone to champion as a new and rising voice in West London’s rap scene. With over 200 million collective streams, Central Cee is impossible to ignore.