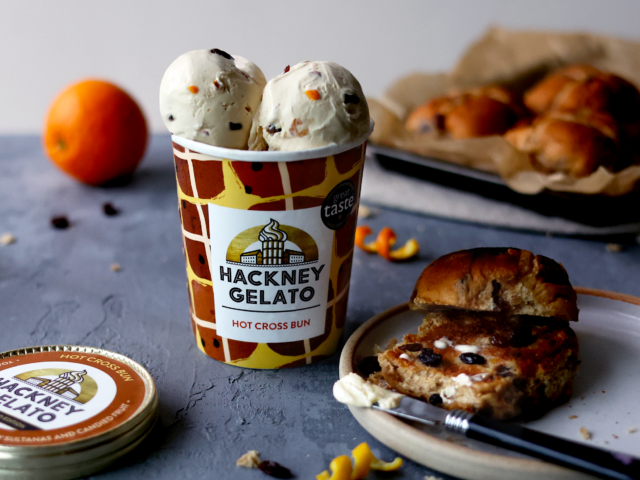 Hackney Gelato, the acclaimed makers of proper Italian gelato and sorbetto, have got together with Ocado.com to launch the UK’s first ever Hot Cross Bun Gelato.

They first launched their Hot Cross Bun Gelato in March 2020. People loved it – the 1000 tub, limited edition run was a complete sell out and won a Great Taste Star – but we can all agree it was slightlyovershadowed by other (much more important) stuff going on in the world. So, this year, Hackney Gelato and Ocado are bringing out the UK’s first ever Hot Cross Bun Gelato. For a second time.

Six years on, Hackney Gelato has 22 Great Taste stars to its name and is served on the menus of Michelin-starred restaurants. They now supply shops, restaurants and living rooms across the land with a retail range available on Ocado, Waitrose, Whole Foods Market and Farmdrop. Nigella Lawson [cough, name drop] is a big fan.

This limited-edition recipe is made by infusing fresh British milk with freshly toasted hot cross buns. Sultanas, candied fruit and a good dollop of salted butter are added to creamy, slow churned gelato to create a properly indulgent fusion of Italian technique and British flavour.

Slow churning is one of the things that distinguishes gelato from ice cream. It means less air is incorporated into the mix, resulting in a smooth, dense, rich texture, without the iciness you typically get in ice cream. And because it’s made with more milk and less cream, gelato contains less fat than most ice creams. This allows the true taste of the ingredients to come through, creating deeper, more intense flavours.

“If you want a proper Easter treat…” says Enrico Pavoncelli, Founder, “order a tub from ocado.com and scoop it liberally on a freshly toasted hot cross bun. You will not be disappointed. But be quick though – our Hot Cross Bun Gelato is a limited edition and if last time is anything to go by it won’t hang around.”