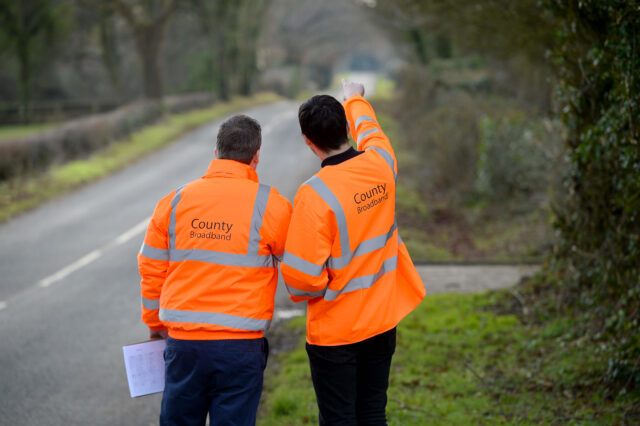 A Colchester firm building full-fibre broadband infrastructure in Essex has pledged a “Herculean effort” for villages after MPs raised concerns rural areas could be locked out of cutting-edge internet for years because of a “litany” of government failures.

The Public Accounts Committee (PAC) accused the government of “yet again failing to prioritise” rural areas in a new report. MPs fear hard-to-reach areas could be left behind amid the government’s new target of providing gigabit-capable connections (1,000Mbps speeds) to 85% of the UK by 2025.

Prime minister Boris Johnson is relying on local providers like County Broadband, based in Aldham near Colchester, to accelerate the rollout of full-fibre broadband infrastructure to replace the current Victorian copper-based networks on which ‘superfast’ connections are based. It forms a key part of his “infrastructure revolution”. The UK has one of the lowest rates in Europe of access to full-fibre broadband, which is considered “future-proof” as it can handle new technologies that use a lot of data.

County Broadband is working with over 100 villages across East Anglia, including the Colchester, Braintree and Chelmsford areas, to build full-fibre infrastructure and provide access to hyperfast connections. It is backed by a £46 million private investment from Aviva Investors.

Lloyd Felton, chief executive of County Broadband, said: “Lockdown 3 is once again exposing critical problems with our outdated digital infrastructure with businesses struggling to work from home and children unable to access online learning. Broadband has long been our essential fourth utility and reliable connectivity could be viewed as a human right in 2021.

“The path to full-fibre has its challenges and to succeed it requires a Herculean effort with local providers and the government working closely together to consign copper-based networks to the history bin. Whilst we were disappointed the flagship gigabit target was downgraded to 85% of UK homes by 2025, we must focus on achieving and exceeding this new goal.

“Bullet-proof connectivity will be the foundation of the Covid-19 economic recovery as the nation works to ‘build back better’. We’ve seen in the past how rural areas have been left behind, from superfast speeds to the rollout of 4G and 5G. We cannot afford to make the same mistakes again.

“We’ve worked tirelessly throughout the pandemic to build and connect homes and businesses to our new hyperfast full-fibre networks, backed by millions of pounds of private investment from Aviva Investors.

“The pathway out of the Covid-19 crisis is thankfully becoming clearer with each passing day. We must therefore apply the same grit and determination to ensure no-one gets left behind. So our message to residents and businesses blighted by poor broadband in rural areas of Essex – stay tuned as next-generation broadband is on its way to uplift your lives during the pandemic and beyond.”

Meg Hillier, chair of the PAC, said: “With the grim announcement that the country and economy will be locked down for months, the government’s premises on digital connectivity are more important than ever. But due to a litany of planning and implementation failures at DCMS, those promises are slipping farther and farther out of reach, even worse news for the rural excluded who face years trying to recover with sub-standard internet connectivity.”

A Department of Digital, Culture, Media and Sport (DCMS) spokesperson said: “Gigabit capable broadband is being rolled out rapidly – from one in 10 households in 2019 to one in three households today. We expect that half of all households will have access to gigabit speeds by the end of this year, and the UK is deploying at a faster build rate than comparable countries.

“This is evidence of the progress we have made to support the private sector and reduce barriers to rollout. We will take further rapid steps this year alongside the investment being made as part of our record £5bn UK Gigabit Programme, which will focus on ensuring the hardest to reach 20% of the country is not left behind.”