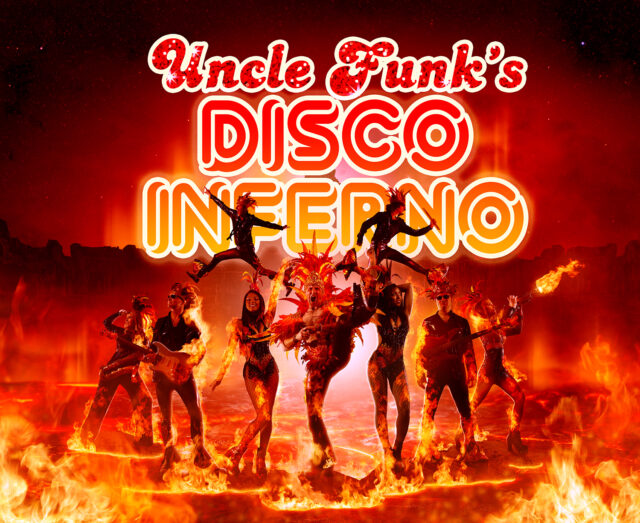 “Uncle Funk returns to the stage in 2021 with his new band and show, “Uncle Funk’s Disco Inferno!” but fans will get a chance to see the show this Christmas via a live streamed concert in conjunction with the South Mill Arts on December 23rd!

Their Christmas concert will be aired exclusively to online ticket holders and will be available to view from 7.30pm on December 23rd for 2 weeks.

Tickets can be purchased at £13 each from www. southmillarts.co.uk. Fans are advised to snap the limited tickets up and get themselves dressed up for a “Disco In-Furlough” party at home!

Billed as “The Most Explosive Disco Show on the Planet!” the new nine-piece band features award-winning singers, musicians, acrobats and circus performers who elevate the legendary disco band to an explosive and exciting new show.

One major difference people will notice is the change in costumes; “It was time to make a change to the out-dated look we have been using over the past 25 years” commented Uncle Funk. “We are very aware of and respect changing perspectives and the importance of recognising and putting a stop to appropriating cultures, so we wanted to ensure our new outfits, and particularly our headgear, was reflective of that.” Their new outfits feature fiery colours, disco flairs, and a lot of feathers! And rest assured – Uncle Funk insists that his codpiece remains an important part of his look!

Uncle Funk’s new band features a host of incredible musicians. Featuring the “Sea Sisters” on vocals, Tanya and Lauren Seifert are incredible singers and circus performers, the former of which also sings with the hit theatre show Women In Rock. They will be joining Uncle Funk on lead vocals.

Guitarist/Singer Bobby Harrison was the guitarist for West End show “We Will Rock You” before joining the Australian Pink Floyd Show and most recently Cliff Richard. Bassist/Singer Mike Brooks has a huge CV including playing bass for Bonnie Tyler, amongst others! Keyboard player James Beckwith is the touring keyboard player for jazz saxophonist Nubya Garcia and has two solo albums to his name. Drummer Ajit Gill also plays for Bishop’s Stortford-based nu-jazz artists Vertaal, who are releasing their debut album in 2021. Finally the all-female horn section feature saxophonist Fiona Asbury who plays with the celebrated Veya Saxophone Quartet and has toured the world with the all-female Marici Saxes and 15-piece all-female swing orchestra, The Bombshellettes. Trumpet player Rosanne Duckworth has performed in the West End show Wicked, the UK official tours for Barnum and Dirty Rotten Scoundrels, the European production of Evita and the BBC Philharmonic Orchestra.

Together as Uncle Funk’s Disco Inferno their set features your favourite disco hits alongside some more modern dance classics, so expect some surprises!

The band will be playing at the Southmill Arts Centre on March 26th 2021 and at a plethora of festivals in the summer.
Check the website for more details
www.unclefunk.co.uk