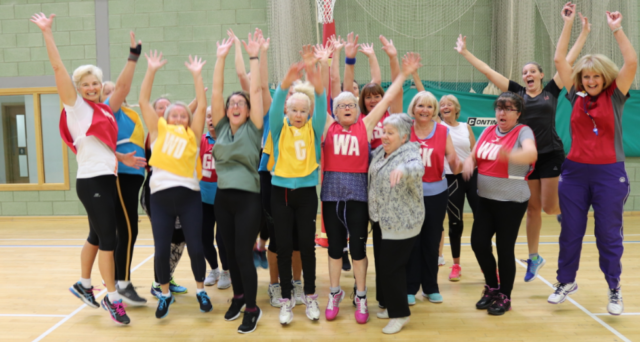 A local walking netball host in Basildon has been praised for her efforts in getting the community active and keeping spirits high throughout the last two national lockdowns.

Jean Lawrence, 64, was recently nominated for a national award from England Netball, recognising her commitment to bringing the local community together through netball. The ‘Goalden Globe #RiseAgain Champion’ award recognises an individual or group of individuals that have delivered an innovative experience or approach to enable members of the Netball Family to overcome adversity during these challenging times.

Jean has been hosting walking netball sessions at Basildon Sporting Village since 2017 and initially the sessions attracted around six to seven ladies, but today the group has grown to be hugely popular with over 40 members.

The centre, run by Everyone Active in partnership with Basildon Borough Council, hosted two 1.5 hour sessions a week which not only gave participants the opportunity to take part in exercise, but also an opportunity to socialise afterwards, with refreshments included in the session price. The team also regularly went on trips to the theatre, out for dinner and other fun activities which Jean and another member helped to organise.

However due to coronavirus restrictions, the sessions came to a halt when the first lockdown was imposed in March. Nevertheless, this didn’t stop Jean from bringing the group together virtually.

Jean believes age is no barrier when it comes to keeping active. She said: “We have a wide range of people attending the group from those in their late 30’s to our eldest member at 81 years old. The sessions teach our ladies what it’s like to take a step back from normality of being a mum, carer or grandma and people really valued that time to themselves each week. It was amazing to see confidence levels go up and the physical and mental change in our ladies. Friendship groups formed fast, so it was hard when the lockdown came along.

“I started to think about what we could do with the restrictions, and that’s when our Whatsapp sessions became invaluable. We went through skills and drills and those who didn’t have a netball at home even used a toilet roll instead! Our Whatsapp group was also used to keep in touch with one another for a chat whenever we needed it.”

The group also swapped their netballs for knitting needles as they came together to knit some lap blankets for a local care home.
Even though the ladies are still unable to train at the centre due to local restrictions, they now meet up in smaller groups for weekly walks and Jean also hosts a Zoom game and quiz twice a week.

Jean added: “Being nominated for an award from England Netball was amazing and I’m truly honoured to have been a part of the process and to have been considered.

“It’s been a wonderful journey and a total joy to see what members have got from the sessions and the support and friendship groups they have formed. Whilst we are missing being in the centre, it’s great that we can still connect via Whatsapp and online and keep great camaraderie among the team. Together netball will #RiseAgain.”