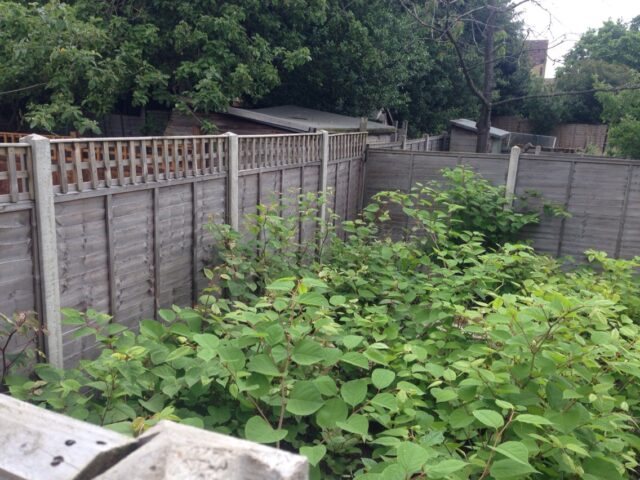 Japanese knotweed is becoming a highly litigious issue among both homebuyers who unwittingly purchase affected properties and homeowners who are subject to encroachment of the invasive plant from neighbouring properties, according to new research released today by YouGov and Environet UK.

Due to the cost of treatment and the potential negative impact on a property’s value, it’s tempting for sellers to claim ignorance of a Japanese knotweed problem. But as awareness of Japanese knotweed grows, now standing at 82% in the East of England, people are becoming better informed about the laws that govern both the sale of affected properties and those that protect victims of encroachment – and a large proportion are willing to pursue litigation if necessary to recover their losses.

The survey of over 2,000 British adults showed that 78% of people in the East who are aware of the plant would sue the seller if knotweed was discovered after they bought a property that had not been declared on the Law Society’s TA6 form. This is the highest of any UK region. The TA6 is completed as a standard part of the conveyancing process and asks a specific question about Japanese knotweed. Under current legislation, sellers who knowingly fail to declare the plant’s presence can be sued for misrepresentation, meaning the buyer can seek compensation for diminution in the property’s value, if it can be proven that the plant was present at the time of the sale.

Nic Seal, Founder and MD of Environet UK said: “Now more than ever it’s vital that sellers are honest and declare that there is, or could be, knotweed growing on their property. Awareness among the general public is now so high and there’s such a strong precedent set in the courts that it’s likely they will end up paying the price further down the line if they answer dishonestly or claim not to know of its presence. In fact, it’s quite easy for a Japanese knotweed expert to tell how long an infestation has been there and, in encroachment cases, the source of the infestation.”

Awareness of the law around encroachment is also high, with 72% of respondents in the East realising they could be liable for the cost of treatment if Japanese knotweed originating on their property spreads to their neighbour’s land. However, fewer (44%) were aware they could also be liable for all legal fees and just under one third (31%) knew that they could also be liable for diminution, or fall, in the value of their neighbour’s home. This can easily run into tens of thousands of pounds – or much more if the knotweed encroaches into multiple properties.

Homeowners can easily face bills of around £30,000 from an encroachment claim, rising to £70,000 or more if the claim succeeds in court. If the knotweed spreads to more than one property then the bill could climb even higher.

“I would say cases have increased around 30% over the last 3 years, which is down to growing awareness of the problem and the laws in place to protect people, relatively high success rates in legal cases, and recent changes to the TA6 form which puts more of an onus on the seller to highlight any issues with knotweed.”

Explainer: What is the law around Japanese knotweed?

Buying and selling homes: All sellers are required to complete the Law Society’s TA6 form as part of the conveyancing process, which asks whether the property is affected by knotweed. If they respond “No” the seller must be certain that no rhizome (root) is present in the ground, or within 3 metres of the boundary, even if there are no visible signs above ground. If a seller answers “No” or “Not known” but Japanese knotweed is later discovered, the buyer of the property may be able to bring a misrepresentation claim against them for diminution in value of the property. It will be necessary to obtain evidence from an expert that the plant was present at the time of sale even if it was not visible, and that the seller was aware, or should have been aware, of its presence.

Similarly, the buyer may have some legal recourse against the surveyor if professional negligence can be proved in failing to identify knotweed during a property survey.

Encroachment from one property to another: It is not illegal to have Japanese knotweed growing on your property but it is illegal to allow it to spread to other properties nearby. Knotweed roots typically extend 2 to 3 metres laterally and do not respect boundaries. If the plant encroaches, the affected owner can bring a claim through ‘private nuisance’ legislation, forcing their neighbour to pay for professional treatment, compensate them for any fall in the value of their property and cover their legal fees.